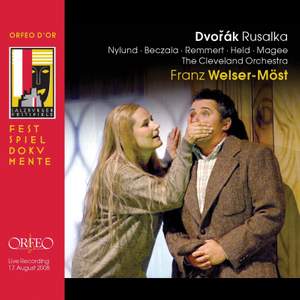 The 2008 Salzburg Festival production of Dvořák’s opera Rusalka was outstanding even by the Festival’s high artistic standards. Its exceptional nature was due in part to the fact that in the pit the Cleveland Orchestra was appearing for the first time as an opera orchestra in Salzburg. The high expectations raised by the orchestra and its Music Director, Franz Welser-Möst, were fully met, and even in the live recording of the opening night made by Austrian Radio, the conductor’s genuinely dramatic approach to the work is never less than gripping.

The fairytale narrative gains in psychological focus and depth, aided and abetted by the team of soloists headed by Camilla Nylund as Rusalka and Piotr Beczala as the Prince. To the role of the water nymph, Nylund brings a beautiful lyric soprano voice that retains its focus and penetrating power even in the score’s most dramatic outbursts, while the bright tenor voice of Piotr Beczala produces a convincing vocal portrait of the hapless heroine’s inconstant lover, following her decision to enter the world of mortals.

The remaining roles were cast from strength, notably the admonitory figure of the Water Goblin, taken here by Alan Held, whose powerful Wagnerian bass-baritone lends the role an impressive profile; Birgit Remmert, with her dark-hued, impressively full-toned voice and Emily Magee’s burnished soprano, with its brilliant upper register.

Particularly gratifying in a Salzburg Festival production is the casting of minor roles with promising young singers including Eva Liebau as the Turnspit, Adam Plachetka as the Gamekeeper and the three well-modulated wood nymphs of Anna Prohaska, Stephanie Atasanov and Hannah Esther Minutillo. Appearing alongside this team of singers is the Vienna State Opera Chorus on outstanding form. All in all, then, it comes as no surprise to know that the response to the musical side of this production was extremely positive, a response which it is hoped will be repeated in the case of the present live recording.

[The nightmarishly dark production of Dvorak’s fairytale opera Rusalka by prize-winning directors Sergio Morabito and Jossi Wieler divided the audience at its first-ever staging at the Salzburg Festival.]