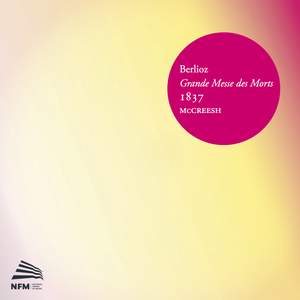 With a massed choir of English and Polish singers and an orchestra which deploys as many authentic nineteenth-century instruments as possible, McCreesh plays up not only the sound and fury of Berlioz’s super-sized Requiem but also the astonishing range of textures which the young composer summons.

The first in a new series of releases from the world-renowned conductor Paul McCreesh and his Gabrieli Consort. Called Winged Lion (the symbol of Venice and of St Mark, as well as the Gabrieli Consort), the label will release recordings of Renaissance and Baroque repertoire, as well as large-scale 19th-and 20th-century oratorio, including on the near horizon, Howells’ Requiem Recorded in Poland as part of the Wratislava Cantans Festival (of which McCreesh is artistic director) this staggering performance of Berlioz’s ‘Grand Mass for the Dead’ is produced by a force of over 400 performers – drawn from the Gabrieli Consort and Players, the Wroclaw Philharmonic Orchestra and Choir and students from Chetham’s School of Music.

Future releases with McCreesh will include Mendelssohn’s Elijah [with Simon Keenlyside] , Haydn’s The Seasons, Britten’s War Requiem and a re-recording of their famed disc ‘A Venetian Coronation’, about which Gramophone had said: “Without doubt, this is one of the finest records of Italian Renaissance polyphony to appear for a long time”. The year also marks the ensemble’s 30th anniversary, and the 400th anniversary of the death of Giovanni Gabrieli whose music, along with that of Andrea Gabrieli, features on the recording.

Founded in 1982 by artistic director Paul McCreesh, the Gabrieli Consort & Players are world-renowned interpreters of great choral and instrumental repertoire, spanning from the Renaissance to the present day. Their performances encompass virtuosic a cappella programmes, mould-breaking reconstructions of music for historical events and major works from the oratorio tradition. With Paul McCreesh, the Gabrielis are regular visitors to the world’s most prestigious concert halls and festivals and have built a large and distinguished discography.

McCreesh provides pretty much the enormous forces Berlioz demands...But he recognises that Berlioz sought more than mere noisy grandeur, and the results are fascinating. McCreesh's pace is fairly slow and weighty, but it seldom feels slack. In the reverberant acoustic of Mary Magdalene, Wroclaw, textures remain open....Even those used to the Colin Davis or Charles Munch tradition may find its airy beauties compelling.

McCreesh has achieved something quite out of the ordinary in this performance...The impact is overwhelming, not merely in the full-throated eruptions...The concept of Berlioz's Requiem Mass may embrace a certain element of grandiosity but, listening to this performance, it is impossible to forget that Berlioz was a supreme orchestrator and a composer with a broad dramatic talent.

A triumph of performance and scholarship

McCreesh’s speeds work perfectly. The chorus – singing in French Latin rather than the usual Italian Latin – are outstanding, singing beautifully throughout yet with real punch when required...It comes with my highest recommendation, and I’d really urge you to explore it.

as fine an account as I have ever heard...overwhelming in the great apocalyptic tuttis, but at the same time beautifully clear in detail, with a lovely bloom on the individual choral and instrumental lines of this paradoxically intimate work...[McCreesh] has a profound understanding of the score and has inspired his Anglo-Polish forces, above all the superb chorus, to feel it with him and take it to their hearts.

The result is clear-textured and austere, even where the decibel count is extreme in the Dies Irae...McCreesh keeps it all on a tight rein, but the chief glory is the choral singing, superb in its fervour and weight, with the difficult tenor line notably strong and ecstatic.

an interpretation that is impressive not merely by dint of the music’s more monumental statements or its ample sonorities, but also through the subtlety of expression that Paul McCreesh elicits from the massive forces required to perform it.

I’d turn to this performance most for its gentler qualities: like the loveliness of the Wroclaw Philharmonic Choir; or the quiet corners of the final sections, when rest eternal beckons and the instruments’ individual colours rise to the fore. Robert Murray, the tenor soloist, wafts down nicely from on high.

The Independent on Sunday 23rd October 2011

Berlioz's 1837 Grande Messe has rarely sounded so thrilling or transparent...the muted plangency and expressivity of [McCreesh's] female semi-chorus in the "Sanctus" is every bit as impactful as the rolling waves of timpani in the "Tuba Mirum", while the snaking coils of strings have an otherworldly, Gothic flavour.

well recorded in a suitably reverberant acoustic, it sounds stunning...this is a definitive recording of a staggering piece.