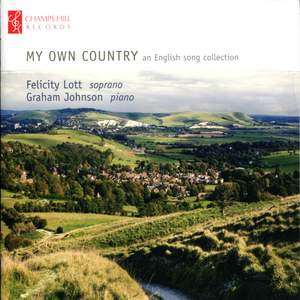 My Own Country: An English song collection

The singing and accompaniment are generally superb - with musical intelligence, understanding and good communication, but I did feel that there were some works - especially those by Quilter -... — MusicWeb International, 1st October 2013 More…

I Have Twelve Oxen

Lines Written By a Bear of Very Little Brain

When I am Dead, My Dearest

Felicity Lott brings her delicacy and rich understanding to a collection of English song inspired by the idyllic Sussex countryside.

The Englishness typified here is not derived from one unique musical style; rather from each composerʼs response to the texts. Graham Johnson groups together songs under headings Country Courtship. . . To Music. . . . Loveʼs Philosophy. . . . Country Scenes. . . . Night & Dawn. . . .Childrenʼs Cornerʼ. . . and Envoys on this charming - and occasionally surprising - disc.

It includes songs by Quilter, Elgar, Parry, Ireland, Bax and Holst. The Elgar songs Speak Music and In Moonlight (included under the heading ʻTo Musicʼ) remind us that the paradigm of Englishness Elgar cultivated was more to do with his association with ʻPomp and Circumstanceʼ than necessarily musical matters. As part of ʻCountry Scenesʼ, Bridgeʼs jolly Go Not, Happy Day gives nothing away about its year of publication, 1916, and the scars which led to later music of a more sombre tone.

Also included are a selection of Harold Fraser-Simpsonʼs songs based on verses from A.A. Milneʼs The Hums of Pooh, and settings by Liza Lehmann - the Edwardian English operatic soprano - including Matilda from ʻFour Cautionary Talesʼ by Hillaire Belloc, a duet with both parts taken by Felicity Lott. The CD takes its title from Peter Warlockʼs setting of another Belloc text - My Own Country.

Dame Felicity Lott lives in Sussex and was the very first artist to perform in the Music Room at Champs Hill. In 2005 she and Graham Johnson returned there to mark the 30th anniversary of her Wigmore debut with this programme (previously release on the ASV label). Champs Hill Records will also be releasing new recordings of further Elgar songs with Dame Felicity in October 2011.

The singing and accompaniment are generally superb - with musical intelligence, understanding and good communication, but I did feel that there were some works - especially those by Quilter - in which Lott regrettably doesn’t quite capture the beauty and simplicity of these gorgeous works.