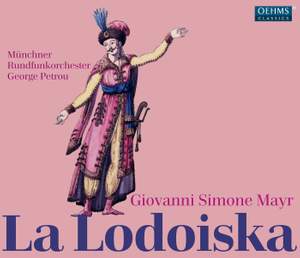 This opera was premiered in Venice in 1796 and was among the most popular operas of its time. The figure of Lodoiska and her musical characterisation are among Mayr’s best creations. His works are receiving a well deserved Renaissance. This performance was recorded live during a guest performance of the Munich Radio Orchestra in Ingolstadt in September 2010.

Anna Maria Panzarella's bright soprano is beautifull complemented by the darker tones of Elena Belfiore in the trouser-role of Lovinski. Jeremy Ovenden makes an ideal Boleslao, his forthright tenor never less than elegant. Petrou's fortepiano continuo is as stylish as his conducting. To the artists, congratulations all round.