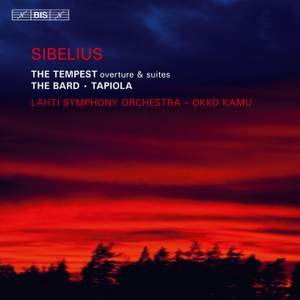 Sibelius: The Tempest Overture and Suites

For Kamu, [Tapiola] is a drama of the imagination and one discerns dimly the forest god moving between the trees, just as Sibelius intended. WIth superb sound, this is strongly recommended. — Gramophone Magazine, January 2012 More…

I. The Oak Tree

I. Chorus of the Winds

To many, the Lahti Symphony Orchestra has become synonymous with excellence in Sibelius repertoire. Its numerous recordings with the previous chief conductor Osmo Vänskä have received countless distinctions and awards. On the present disc the orchestra is conducted by Okko Kamu, Vänskä's successor as chief conductor.

Here three other works by Sibelius make up the programme, which opens with music for Shakespeare's play The Tempest, for which the composer in 1925 wrote the most ambitious of his several theatre scores.

In 1926, a year after The Tempest, Sibelius again turned to the realm of magic in his masterful evocation of the forest, the symphonic poem Tapiola. The title can be translated as ‘the domain of Tapio’, god of the forest in Finnish mythology. The work has been regarded as one of the greatest masterpieces from Sibelius’ pen.

These two large-scale works are here separated by the seven-minute long symphonic poem The Bard from 1913, a work which in its treatment of the thematic material and the chamber-music-like quality of its scoring invites comparison with the Fourth Symphony of two year’s earlier.

For Kamu, [Tapiola] is a drama of the imagination and one discerns dimly the forest god moving between the trees, just as Sibelius intended. WIth superb sound, this is strongly recommended.

it's clear from this latest disc with its new chief Okko Kamu, who takes up his post this autumn, that the commitment to Sibelius is set to continue...On this evidence Kamu is a less flexible, more regimented Sibelius conductor than Vänskä, just as careful with instrumental detail