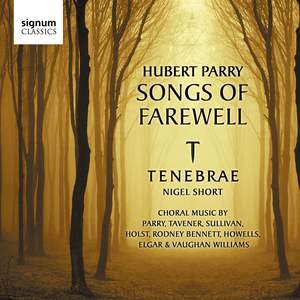 [Tenebrae's] account of Parry's Songs of Farewell abounds in subtleties of phrasing and telling distinctions of dynamic, yet flows beautifully, the textual narrative unfolding with a rare continuity... — BBC Music Magazine, December 2011, 5 out of 5 stars More…

My Soul, There is a Country

I Know My Soul Hath Power to Know All Things

There is an Old Belief

At the Round Earth’s Imagined Corners

Lord, Let Me Know Mine End

Following a string of five-star reviews for their previous discs of 20th-century French choral music (Poulenc’s Figure Humaine ) and Renaissance polyphony (Victoria’s Requiem), the professional chamber-choir Tenebrae go from strength to strength with this new recording of British partsongs and choral music – centred on Hubert Parry’s Songs of Farewell.

Composed towards the end of Parry’s life, the Songs of Farewell have taken on something of an epithetical interpretation; they are almost a musical summation of his compositional life, reflecting Parry’s love of English renaissance madrigals and partsongs as much as the influence on his work from German composers like Brahms – made more complicated as these works were composed as the country (and its music) fell out of favour at the start of the Great War.

[Tenebrae's] account of Parry's Songs of Farewell abounds in subtleties of phrasing and telling distinctions of dynamic, yet flows beautifully, the textual narrative unfolding with a rare continuity and coherence. Technically the singing is impeccable without being at all effortful or studied...Huge credit to Nigel Short. Of this programme's type, I can't envisage hearing anything better.

all performed with Tenebrae’s customary poise.

Short gives wonderful shape to the well-known 'My soul, there is a country' and extracts that essential longing from 'I know my soul hath power'...Most impressive, however, is the fluidity of the double-choir motet, 'Lord, let me know mine end', the textual clarity and emotional intensity of that fairly summarises the complexity of the composer's heterodoxy.

The tone quality achieved by Tenebrae is incredibly smooth and consistent. There isn't a hint of unevenness or unwanted peaks and troughs within individual voice parts. It's an extremely easy choir to listen to...there is a very quiet, still quality to the disc that, over the course of the whole programme, is quite soporific, relaxing and altogether ideal for a winter evening's listening.