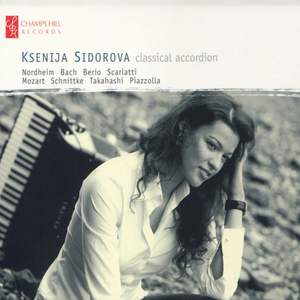 Anybody disinclined to take the accordion seriously as a classical instrument should listen to the opening track here...[the Nordheim and Berio] are advertisements for the accordion's expressive... — BBC Music Magazine, December 2011, 4 out of 5 stars More…

A particularly accomplished artist, Ksenija has collaborated with many leading musicians (including the Belcea Quartet, and Valergy Gergiev with the CBSO), and won numerous awards and accolades.

“one of the real finds of this series” The Times

Still an underexploited resource in western classical music, the accordion has had a fast-increasing amount of music written for it since the mid-20th Century. Here, Ksenija Sidrova brings a varied recital featuring some of the best contemporary compositions for the classical accordion, alongside transcriptions of well-known works.

No composer has been transcribed more often than Bach; but the accordion - heard here in Bachʼs Overture in the French Style - brings an advantage that few other instruments can offer; itʼs notes do not die away as soon as they are sounded. This allows an array of colouristic possibilities, denied to other musicians.

Amongst the contemporary works here, Arne Nordheimʼs Flashing, written in 1985 for solo accordion, has become a classic of the accordion repertoire. Nordheimʼs music has a real sense of physicality, of movement and change on a large scale. In contrast, Luciani Berioʼs Sequenza XIII opens with a compressed melody which is gradually developed amid splashes of complex harmony and virtuoso filigree.

Yuji Takahashuʼs Like a Water-Buffalo is preceded on this disc by the poem that inspired it. Well-known in Takahashiʼs native Japan, it is a moving, heartfelt piece, strongly transmitting the sounds of freedom.

Anybody disinclined to take the accordion seriously as a classical instrument should listen to the opening track here...[the Nordheim and Berio] are advertisements for the accordion's expressive potential, mining its virtuosic possibilities...a debut recording full of panache and communicative musicianship.

Sidorova here demonstrates the remarkable potential of the accordion, not an instrument generally appreciated in classical circles...[The Bach] is fascinating, with Sidorova making the accordion sound like a miniature organ...An attractive and unusual disc.

The accordion’s sound world is characterful but somewhat constrained. It needs a virtuoso such as the young Latvian Sidorova to show just how flexible the instrument can be...In transcriptions of Bach, Scarlatti and Mozart, Sidorova is simply brilliant and staggeringly precise.

though the set of extracts from Schnittke's one-act Sketches is imaginatively put together, it is the works by Nordheim and Berio that show the range and control of Sidorova's playing at its best. Flashing actually exploits the accordion's special qualities very effectively, especially its ability to produce sustained crescendos and diminuendos

Her determination to extend the instrument's reputation from its folk roots is formidable. She studied at London's Royal Academy of Music and has won numerous prizes. You can see why. Technique and phrasing in Mozart's 12 Variations on "Ah, vous dirais-je, Maman" are subtle and witty...all [are] played with light, shade, delicacy – and breathtaking virtuosity.

Scarlatti and Mozart are played with delicacy and grace. Modern accordion classics by Arne Nordheim and Berio get atmospheric outings: Berio’s Sequenza XIII emerges as a masterpiece of suppressed emotion. Schnittke’s sardonic reworkings of Mozart and Tchaikovsky are superbly delivered.