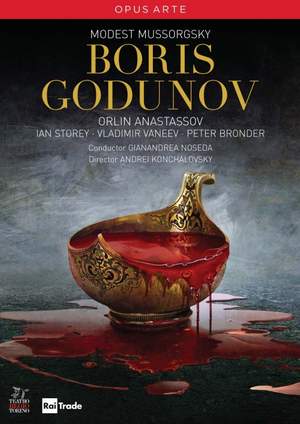 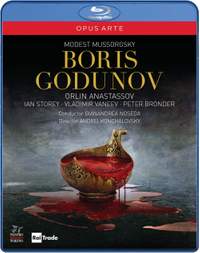 Boris Godunov is the story not only of a troubled leader but of an entire nation, and its history is as eventful as that of Mother Russia herself. In this new production, the legendary director Andrei Konchalovsky presents a personal vision of the opera that takes Mussorgsky’s bare and monumental first version as its basis, while adding the final scene from the composer’s revision, in which not only the Tsar but the people themselves reveal their fatal flaws.

Konchalovsky sticks to the 1869 original...Orlin Anastassov makes a rich-voiced but wildly over-the-top Godunov...It's good to have the superlative treble Pavel Zubov as Boris's son Fyodor...Best is Gianandrea Noseda's fluent and urgent conducting

[Noseda] paces and balances Boris most naturally, eschewing brassy climaxes or over-melodramatic spookiness...Konchalovsky's detailed work with his responsive soloists has some of the over-the-top manic energy of Orson Welles in his Shakespeare films: the glinting, desperate, trapped eyes of Orlin Anastassov's Tsar and the fussy sweat-wiping mannerisms of Peter Bronder's Shuisky create an apt other-worldly presence. Both too are in fine voice.

Anastassov is vocally and physically imposing as the Tsar. It is not, I think, being fanciful to say that from early on his staring eyes reflect the first signs of Boris's mental derangement. His voice emerges with deep resonance, focused, flowing, dark of timbre...The cast has no weaknesses...I rate the performance highly.

The chorus especially are on top form.

Noseda is well-schooled in this repertoire through Valery Gergiev’s mentorship and offers a viscerally exciting performance of the score. His tempi are keen and there is plenty of thrust to his orchestra’s attack...Orlin Anastassov is a much younger Boris than we’re used to seeing, but then the real Boris Godunov became regent at the age of 34. Opulently costumed, he cuts a noble figure from the start and has the vocal resources to match.