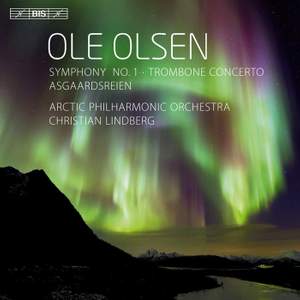 [Olsen's] music is pleasant enough; the Trombone Concerto is a lively vehicle for Lindberg. — BBC Music Magazine, December 2011, 3 out of 5 stars More…

Born in Hammerfest, situated some 450 km north of the Arctic Circle, Ole Olsen was a contemporary of Grieg and Svendsen. He studied at the conservatory in Leipzig and returning to Norway in 1874, Olsen completed his Symphony No. 1.

From early in his career he had been influenced by the major works of Wagner and Liszt, and it is possible that Liszt’s symphonic poems were the inspiration for Asgaardsreien (The Ride of Asgaard). In the work, Olsen vividly depicted the mythical ‘Wild Hunt’

This fascinating composer and his colourful music are portrayed here in the first recording by the Arctic Philharmonic Orchestra, based in the region of Tromsø-Bodø. The orchestra’s flamboyant chief conductor, Christian Lindberg, also appears in his guise as trombone virtuoso in the first ever recording of Olsen’s Concerto for Tenor Trombone and Orchestra from 1886.

[Olsen's] music is pleasant enough; the Trombone Concerto is a lively vehicle for Lindberg.

[The Arctic Philharmonic Orchestra is] a fine sounding ensemble with textured strings, luminous woodwinds, tight brass and admirable subtlety across all sections. Lindberg nails the tricky contrasts and nuances of the symphony's Scherzo and finds real tenderness in its 'Wagner meets Elgar' slow Andante...a worthy revival, very well executed. I look forward to more Olsen from Lindberg, which the booklet suggests we'll get.