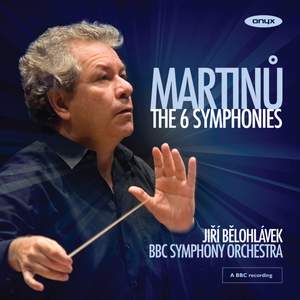 Belohlavek and the orchestra are superb in the first three symphonies. He captures Martinu's shimmering, luminous orchestral textures and invests the pervasive 'sprung' rhythms of the faster... — BBC Music Magazine, October 2011, 5 out of 5 stars More…

Recorded live at the Barbican in London, these recordings represent the first complete CD cycle of Martinu’s symphonies conducted by Jiří Bělohlávek. The critically acclaimed concerts were given to mark the 50th anniversary of Martinu’s death in 1959.

Martinu’s six symphonies are a major contribution to 20th-century symphonic literature, and yet are still undervalued. Spanning the years before, during and after the Second World War, they capture the turmoil, hopes and fears of the composer and his homeland – a homeland that suffered unimaginable cruelties under the Nazis. At the end of the war, Martinu was the only major Czech composer of his generation to have survived.

Yet through the underlying currents of menace in the later works, the irrepressible Czech spirit survives, and the country’s folk music is never far from the surface in these powerful and sincere works. As conductor Jiří Bělohlávek says ‘I personally love all of Martinu’s symphonies for the rich, colourful orchestration and undeniable Czech flair which always prevail in them, despite the fact that they also reflect the musical developments of their time.’

Belohlavek and the orchestra are superb in the first three symphonies. He captures Martinu's shimmering, luminous orchestral textures and invests the pervasive 'sprung' rhythms of the faster movements with an infectious bounce. Belohlavek's emotional engagement is always complete...and throughout the set, Belohlavek's grasp of the trajectory of the symphonic argument is at all times apparent.

The BBC Symphony Orchestra sounds consistently alert, nimble and alive to Martinu's distinct musical moods...Bělohlávek demonstrates total commitment and concentration and his players are with him at every turn, captured in sharp sound that reveals the workings of the music. And since when did the BBC SO's strings have such a chameleonic ability to twist and shade their collective mood? Impressive and charming.

You won’t find a more persuasive champion than Belohlávek, who has the music in his blood. His skill at unravelling Martinu’s rhythmic and textural knots – evidenced time and again in these live performances by the BBC Symphony Orchestra – is such that you immediately sense the stature of the music.

Play them back to back and the inevitable risk is that they may all begin to sound too much alike, but such is Jiri Belohlavek's skill as a Martinu interpreter that the effect is still of impressive stylistic variety...In short, Belohlavek and the BBC SO are now my top recommendation for the Martinu symphonies

Martin˚u’s symphonies tend to divide opinion and have not enjoyed anything like the same exposure as those of his Czech predecessor, Dvorak. But if anyone can find the key to their language, it is Jiří Bělohlávek...there is plenty of freshness, verve and expressive wisdom on this set.

There is no doubt in my mind that Belohlavek and the BBC Symphony Orchestra give us a Martinu 6th Symphony informed not only by the spark of live performance, but also imbued with a deeper understanding of its workings and what lies behind them than anyone else.