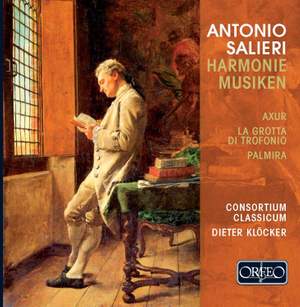 The attraction of Antonio Salieri’s musico-dramatic oeuvre lies in its equal measure of virtuosity, sensibility and comedy, and all of these ingredients are found in the wind band arrangements from three of his operas recorded here. In his La grotto di Trofonio, the intense, magical atmosphere is heard already in its charming wind soli for cor anglais and clarinet, and these are to be found again here. The arrangements from Axur, Rè d’Ormus delight us with their exact instrumental reproduction of the vocal virtuosity and charm of its arias and ballads. In Palmira, regina di Persia, Salieri exploits musical contrasts to the full and in an a cappella quartet also proves himself a master of the vocal ensemble. This art naturally also comes into its own in the version for wind band, and rounds off a enjoyably colourful, contrasting programme.

As so often, the clarinettist and music researcher Dieter Klöcker has in the course of his investigations here unearthed treasures for the ensemble Consortium Classicum. Dieter Klöcker died suddenly in May as we were about to present this album. He recorded for Orfeo for almost 30 years and will be much missed. Separate tribute available on request.