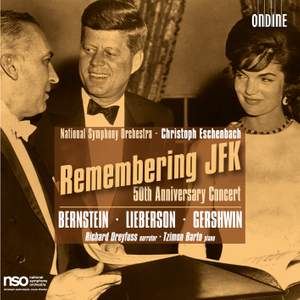 Bernstein: Fanfare No. 1 for the Inauguration of John F. Kennedy (orch. S. Ramin)

Montaine: From Sea to Shining Sea

Thompson, R: The Testament of Freedom

The Testament of Freedom: The God Who Gave Us Life

Celebrating its 80th anniversary season, the NSO here presents its first recording under its new music director. In the U.S., Christoph Eschenbach has previously held music directorships with Houston Symphony, Ravinia Festival, and The Philadelphia Orchestra.

This new release celebrates the memory of John F. Kennedy, and the 50th anniversary of his inauguration as U.S. President, by coupling new and historic recordings by the National Symphony Orchestra of Washington, D.C.

Peter Lieberson's Remembering JFK, which sadly has now become a memorial to the composer as well, sets excerpts from Kennedy's speeches, drily delivered by Richard Dreyfuss, against an orchestral background.

as historical document, Remembering JFK is an absorbing time capsule.