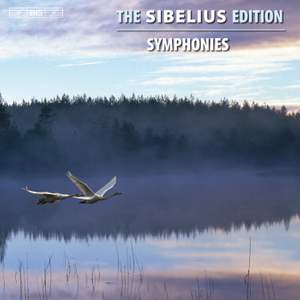 Taken together, this is a comprehensively original cycle, revealing without being controversial, direct in utterance yet precisely calculated. It is certainly, in my view, the finest survey of... — Gramophone Magazine, October 2011 More…

June sees the release of the penultimate instalment of BIS’ Sibelius Edition, and here we return to a genre for which he is particularly celebrated, namely the symphonic.

The Seven Symphonies are undisputed treasures of 20th-century music which have fascinated great conductors and international audiences alike. They are here presented in performances by Osmo Vänskä, described in American Record Guide as ‘the Sibelius interpreter de nos jours’, and the eminent Lahti Symphony Orchestra, for whom he was principal conductor for 20 years.

The full symphonies are complemented by alternative versions and fragments which provide a fascinating background to the final versions. The most substantial of these is the original version of Symphony No.5, available only in this recording, which upon its original release in 1996 received a Gramophone Award for its technical qualities and was described as ‘one of the most important and above all interesting records to have appeared for many years’ by the same reviewer.

Also unique to this edition are the recordings of the remaining supplementary material, made under the supervision of the violinist and conductor Jaakko Kuusisto and released here for the first time.

Sibelius expert Andrew Barnett also guides us through this central chapter in Sibelius’ œuvre – an edition not to be missed !

Taken together, this is a comprehensively original cycle, revealing without being controversial, direct in utterance yet precisely calculated. It is certainly, in my view, the finest survey of the past three decades...Splendid sound makes this indispensable for all devotees of Sibelius.

Vänskä’s accounts of the published symphonies are regarded by many as definitive. He’s at his best in Sibelius’s sparer, sparser moments – the Fourth and Sixth are sleek and otherworldly, and the leaner Lahti sound makes the First and Second sound more radical and forward-looking. Nice artwork and informative notes too.