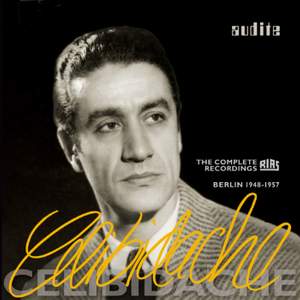 I. Prelude a la nuit

Hindemith: Concerto for Piano and Orchestra

I. Prelude: Stormy winter night at the seaside, on the lonely terrace of the castle

III. March of the dead

The legendary RIAS recordings of Sergiu Celibidache’s concerts made in post-war Berlin (predominantly with the Berlin Philharmonic) represent a piece of musical history.

Sergiu Celibidache (1912-1996) directed the Berlin Philharmonic for seven years after the war as vicegerent for Furtwängler who had been banned from conducting. This period is documented by live and studio recordings of RIAS Berlin. For this edition the original tapes from the RIAS archives have been made available the first time, which means that these CDs offer the highest possible technical quality. With few exceptions, Celibidache was critical of having his interpretations captured as recordings. These productions are therefore of particular interest. They provide – especially as a counterpart to the late Munich recordings – a fascinating insight into the early years of the conductor when he, a temperamental firecracker, enthused his audience. Equally interesting is the unusual repertoire: Busoni, Hindemith, Copland and others, which brings listeners the music of two eminent German composers, Heinz Tiessen and Reinhard Schwarz-Schilling, who are forgotten today, and also contains Harald Genzmer’s flute concerto (1944), the music of which was lost shortly after this RIAS recording.

This Celibidache edition comprises the entire stock of original tapes recorded between 1948 and 1957 which are kept in the archives of Deutschlandradio. Original recordings which were officially deleted but which partly survive in private archives have not been included due to their lesser quality. This production is of high documentary value and a priority production for 2011.