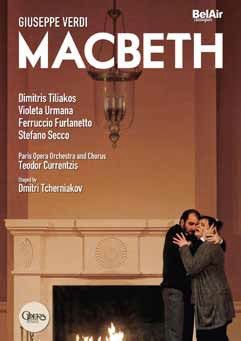 Personal relationships are illuminatingly handled in spite of Tcherniakov's aversion to monologues. Home viewing produces, I guess, a more accessible experience than the audience had in Paris's... — BBC Music Magazine, August 2011, 3 out of 5 stars More…

After public and critical acclaim for his Eugene Onegin (also from BelAir), Macbeth is the latest production from Russian stage director Dmitri Tcherniakov, recorded at the Paris Opera. Coproduced with Siberia’s Novosibirsk Opera, this new Macbeth uses cutting-edge multimedia technology to give the viewer a fresh perspective on the work. Google Earth satellite images plunge us into the heart of the action: a gloomy square surrounded by soulless buildings and the interior of an aristocratic residence. Witches are no more a part of Tcherniakov’s Macbeth than the duel was of his Onegin, but once again the atmosphere is one of brooding claustrophobia. Tcherniakov has chosen a great cast, beginning with the marvellous Lithuanian soprano Violeta Urmana as Lady Macbeth. Greek baritone Dimitris Tiliakos is a powerful presence as Macbeth, while the Italians Ferruccio Furlanetto and Stefano Secco are sumptuous as, respectively, Banquo and Macduff.

In this, his second production at the Paris Opera, Teodor Currentzis, music director of the Novosibirsk Opera and Ballet Theatre, conducts with verve and theatricality.

Personal relationships are illuminatingly handled in spite of Tcherniakov's aversion to monologues. Home viewing produces, I guess, a more accessible experience than the audience had in Paris's acoustically unfriendly Bastille auditorium. In film close-up, for instance, the wonderfully detailed acting of baritone Dimitris Tiliakos, a darkly handsome hero-villain, stands out

Currentzis brings vitality to the performance, with important contrasts within scenes, and works well with the singers. Of them, Tiliakos greatly impressed me by his creation of a multi-dimensional character and in both his singing and his acting...This is indeed a telling portrayal of a man mentally disintegrating. He possess a wide range of dynamics, of shades and of nuancing, all well controlled.

I found Dmitri Tcherniakov’s translation of Verdi’s Macbeth to a modern housing estate run by the Russian mafia intriguing and suggestive, if not altogether persuasive. But if you want a conventional kilts-and-sporran approach, look elsewhere.