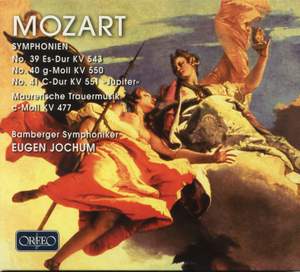 When compared to the many German conductors whose discographical archives have in recent years been rediscovered enthusiastically, Eugen Jochum has been somewhat left behind. And this is despite his having left his mark on two of the world’s leading orchestras of both his day and ours, for he was chief conductor of the Bavarian Radio Symphony Orchestra in Munich and later of the Concertgebouw Orchestra in Amsterdam. And he was furthermore one of the hand-picked group of conductors who re-founded the Bayreuth Festival in the years after the Second World War. Nor was Jochum successful just with Wagner or Bruckner, but also with contemporary works and with 'classics' in the truest sense of the word. In short, his repertoire was all-encompassing.

The trilogy of the last Mozart symphonies that he recorded with the Bamberg Symphony in 1982 offers eloquent testimony of his style of music-making, which had nothing trendy about it, but was timeless and captivating. Neither in his dynamics nor in his tempi did Jochum seek the extremes that some of his colleagues did but when it came to clarity and variety of the orchestral voices and colours, Jochum was supreme. The Jupiter Symphony KV551 is convincing in its cheerful exuberance, just as are the two previous symphonies from the year 1788. The dark colours of the G-minor Symphony KV550 and the slow introduction of the E-flat Symphony KV543 are played in a manner that audibly emphasises their proximity to the music of the Magic Flute, and they remain fixed in one’s memory.

This re-issue as a digipak for the price of a single CD is topped up with the rarely heard Masonic Funeral Music KV477, which is particularly moving here – another, highly expressive late work by Mozart that was written in honour of two brethren who died in 1785. It corresponds perfectly to Jochum’s approach to the Salzburg master – serious and without any airs and graces – and it forms a fine close to this welcome re-acquaintance with Jochum’s art.