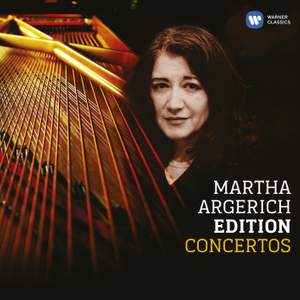 Martha Argerich was born on 5th June 1941 in Buenos Aires. Her interest in the piano showed itself when she was three. Vincenzo Scaramuzza, her teacher, impressed on her the importance of feeling and the singing lyrical line – a facet of her playing which remains immediately recognisable. At the age of eight she made her debut concert playing Beethoven’s first concerto and the following year she gave Mozart’s Concerto No. 20 in D minor, K. 466 and Bach’s French Suite in G, BWV 816.

In 1955 her family moved to Europe so that Martha could study with Friedrich Gulda in Austria; in this she was supported by the Argentine government who gave her parents diplomatic posts in their Embassy in Vienna. She won both the Geneva Music and Ferruccio Busoni International Competitions in 1957, but it was her winning the seventh Chopin Piano competition in Warsaw that confirmed her as a major talent at the age of 24.

Her formidable technique has often been compared to that of Horowitz. She is reputed to have learnt Ravel’s Gaspard de la nuit in three days having been told it was extremely difficult. Her solo career lasted for a quarter of a century during which her talent for interpreting the romantic classics, notably Chopin and Liszt, were matched by her brilliance in the 20th century masters Ravel, Rachmaninov, Prokofiev and Messiaen. Her decision to limit her performances to chamber music and concerto was taken, as she admitted in interviews, to her feeling of loneliness on stage alone. This has been her career path for the last 30 years and she retains the aura of one of the most brilliant of all pianists of modern generations.

She has been particularly generous in supporting the next generation of artists.

She appears regularly as a jury member at important competitions and her friends and protégées captivate audiences with exquisite performances of chamber music at her festival at Lugano. Now at the age of 70 we can salute her as the phenomenon she undoubtedly is and wish her continued success in all aspects of her life.