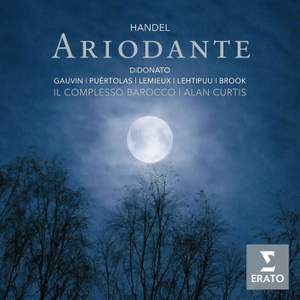 Recitativo: Or venga a me la figlia

Recording of the Week,  Handel's Ariodante

Joyce DiDonato sings the title-role on Alan Curtis’s recording of Handel’s Scottish opera, with Marie-Nicole Lemieux as the dastardly Polinesso and Karina Gauvin as the woman they both love.

In this complete recording of Ariodante, Alan Curtis, a supreme Handelian conductor and scholar, joins forces with glorious mezzo soprano Joyce DiDonato, who, with her Virgin Classics album of Handel arias, ‘Furore’, “scored a triumph … which not only shows her phenomenal technical talent, but verily crackles with dramatic fire” (BBC).

In 2010, Virgin Classics released Curtis’ recording of Handel’s opera Berenice. The US magazine Opera News welcomed it, saying: “At the helm of the superb period-instrument ensemble Il Complesso Barocco, with its smooth violin section and supple, energetic continuo, Alan Curtis paces a well-chosen cast with his customary precision and command ... Singers never seem musically constrained or theatrically hampered, and … the cast exhibits a welcome sureness with Handel's style and rhetorical presentation, both individually and as an ensemble.”

In Ariodante, DiDonato takes the title role of a young prince -- remaining in male mode throughout after her recent gender-swapping antics on the operatic recital CD ‘Diva, Divo’, The role was written for the star castrato Carestini and includes two contrasting showpieces -- ‘Dopo notte’ and ‘Scherza, infida’ – both among the most famous of all Handel’s opera arias.

When DiDonato sang Ariodante in Geneva in 2007, the Financial Times wrote: “How confidently she brings off trouser roles and what spine-tingling effect she puts into a bravura piece such as ‘Dopo notte’”, while the Neue Zürcher Zeitung felt that: “her bright, homogeneous mezzo soprano is wonderfully suited to the passionate lover who, just before his wedding, believes he has been deceived by his betrothed.” The supposedly unfaithful Princess Ginevra is sung here by the sensuous-toned Canadian soprano Karina Gauvin, praised in Handel by Opera News for her “tonal substance, even at pianissimo,” and her “real bel canto technique, all in one voice from top to bottom; the whole aria is carefully shaped without breaking the Baroque boundaries”. Joining DiDonato and Gauvin in the cast are another fine Canadian singer, contralto Marie-Nicole Lemieux, the charming Spanish soprano Sabina Puertolas and the elegant Finnish tenor Topi Lehtipuu.

Gramophone has said that “Alan Curtis has done more than most to prove that many of Handel's 42 operas are first-rate music dramas”, while the BBC Music Magazine has praised him as “a seasoned Handelian who has contributed, perhaps more than anyone now, to the composer’s operas on disc.”

This new recording will further support both those claims and the New York Times’ judgement that he is “one of the great scholar-musicians of recent times”.

in Alan Curtis's scrupulously detailed performance, Joyce diDonato's gleaming legato and coloratura are upstaged by the elegance of Karina Gauvin's Ginevra. While diDonato offers recklessly inventive da capo decorations, Gauvin favours measured pathos...for a complex and moving Ginevra, this is the Ariodante to have

[DiDonato] matches thrilling technical despatch to personable characterisation...She is surrounded by a cast of equally accomplished Handelians...But the key lies in the inspiring musical direction of Curtis...From Il Complesso Barocco, his hand-picked band, he draws playing of infinite flexibility and unforced style.

Ariodante is sung by the wonderful Joyce DiDonato. "Con l'ali di constanza" is taken at quite a lick: fair enough, as the reference is to Cupid's wings. In "Scherz, infida", with its mournful bassoon, DiDonato has the full measure of Ariodante's despair...There are no weaknesses in the rest of the cast. Alan Curtis directs with his customary stylishness and, in the "Ballo di ninfe...", a nice touch of rustic phrasing.

[diDonato's] bravura technique - great Rossini singer that she is - is second to none in 'Dopo notte'. She also brings a rich palette of vocal colour and emotional nuance to Ariodante's other sublime arias...[This is] perhaps the most consistently well-cast Ariodante on record...Curtis's cast, his always sensible approach to tempo...and the superb playing of his Complesso Barocco put this set close to the top of the Ariodante pile.

this new set has all the hallmarks of Curtis’s earlier projects: the pacing (even during the dramatically static first act) is immaculate...Lemieux is thrillingly butch and deliciously insinuating as Polinesso...There may be no shortage of good Ariodantes on disc, but this new contender scores highly both as a team effort and for the spellbinding central performance from DiDonato.

[DiDonato] is almost as compelling a Handelian as she is a Rossinian. She brings rapt expression to Ariodante’s outburst of rage and despair, Scherza infida, with its doleful bassoon solo, and almost jazzily syncopated bravura to his final show stopper, Dopo notte. These are among the American singer’s finest achievements on disc...She is surrounded by a cast without a weak link: as the wrongly accused Ginevra, Karina Gauvin phrases with sculptural beauty

Tempos are wonderfully fresh and vigorous, the phrasing crisp without being clipped...But the singing is the glory of the set: Joyce DiDonato confirms her reputation as the finest Handelian mezzo-soprano of the day...she is so clean of tone, so true of pitch and engaged by the drama that it is impossible to carp. Marie-Nicole Lemieux is thrillingly incisive as the dashingly villainous Polinesso.