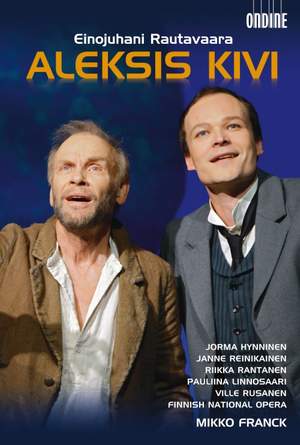 The opera tells the story of Finland’s national author Aleksis Kivi (1834-1872) and draws on many of Kivi’s own poems and texts. Aleksis Kivi wrote the first significant novel in the Finnish language (“Seven Brothers”), but during his short lifetime he suffered from moral and artistic condemnation by literary rivals. He died, insane and impoverished, at age 38.

This Finnish National Opera production is conducted by Mikko Franck and staged by Pekka Milonoff and features Jorma Hynninen in the lead role. Hynninen, upon whose request the opera was written, already headed the casts at the opera’s world première performance in 1997, as well as for the acclaimed première CD recording in 2002 (released on Ondine).