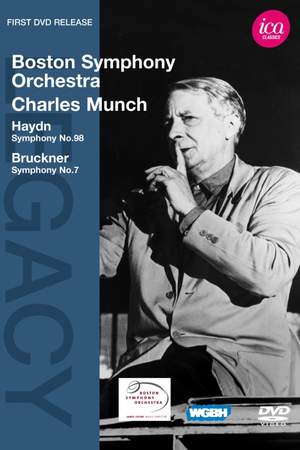 Access to the publicly broadcast BSO concerts from this era has been extremely difficult even for researchers. This series of DVDs will make these performances available for the first time since they were broadcast.

Munch launched the BSO into television in 1955. He was an immensely popular conductor and well suited to being filmed. This material represents some of the earliest televised concerts with the Boston Symphony and Charles Munch, and has been restored using the greatest care and state-of-the-art techniques. It is of exceptional musical interest and rare historic value.

Neither of the two works featured on this DVD have been recorded commercially by Munch, although he programmed both works during his tenure at the BSO.

His renderings of the two symphonies are exciting and spontaneous, with the kind of precision and flair we have come to expect from the BSO under Munch’s buoyant direction.

Two Munch/BSO DVDs from ICA Classics’ first set of releases have been awarded the Diapason d’Or in France’s Diapason magazine.

This is the first DVD release.