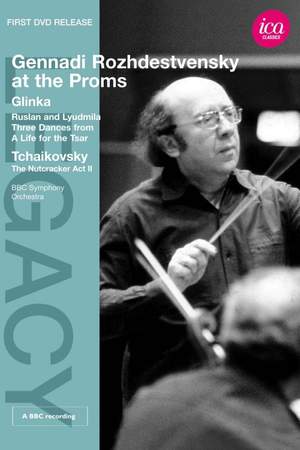 Rozhdestvensky At The Proms

Glinka: Ivan Susanin (A Life for the Tsar): highlights

Gennadi Rozhdestvensky was the BBC Symphony Orchestra’s Chief Conductor from 1978 – 1981. The three performances on this disc are taken from two concerts during the

1981 Proms season and represent him at the highest point of his relationship with the orchestra.

One of the premier conductors of Russian music, Rozhdestvensky is well known for his interpretations of (and love for) ballet scores, having first conducted the Nutracker at the Bolshoi aged 20.

In this complete performance of The Nutcracker’s second act, Rozhdestvensky’s deep understanding of the music and affinity for it are evident.

The 1979 recording of Tchaikovsky’s Sleeping Beauty with the BBCSO on BBC Legends was a Penguin Rosette winner – Rozhdestvensky is described as giving caring and sensitive direction, loving attention to detail, narrative drama and having light rhythmic touch and delicacy of feeling. He remains even today, one of the great interpreters of Russian music.

This is the first DVD release.