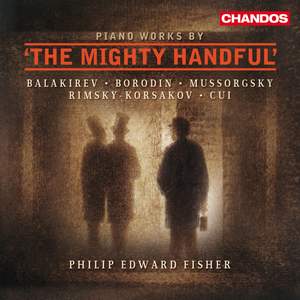 Piano Works by ‘The Mighty Handful’

[Pictures and Islamey] give him a chance to show off his virtuosity and assured technique...Still, the real interest here resides in the more modest works that come in between...This music may... — BBC Music Magazine, July 2011, 4 out of 5 stars More…

V. Ballet of the Chicks in Their Shells

On his first solo recital disc for Chandos, Philip Edward Fisher performs piano works by members of the so-called ‘Mighty Handful’, a group of five Russian composers – César Cui, Alexander Borodin, Mily Balakirev, Modest Mussorgsky, and Nikolay Rimsky-Korsakov – who in the 1860s banded together in an attempt to create a truly national school of Russian music, free of the perceived stiffling influences of Italian opera, German lieder, and other western European forms.

The Mighty Handful were all self-trained amateurs. Borodin combined composing with a career in chemistry; Rimsky-Korsakov was a naval offier; and Mussorgsky had been in the Guards, then in the civil service, before taking up music. They tried to incorporate in their music what they heard in village songs, in Cossack dances, in church chants, and the tolling of church bells; in short, the music of the Mighty Handful was brimming with sounds that echoed Russian life. From the more traditional, Chopin-esque Nocturne by Cui through to the technical innovations and strong Caucasus folk elements of Balakirev’s Islamey, the works here all show the composers’ strong connections with the past and the compositional innovations that would come to influence the likes of Prokofiev and Stravinsky, and help change the course of Russian music for years to come.

A graduate of the Royal Academy of Music and The Juilliard School, the pianist Philip Edward Fisher is widely recognised as a unique performer of refined style and exceptional versatility. He has performed across Europe, Africa, and North America where he made his New York debut at Alice Tully Hall in 2002, performing Rachmaninoff’s Third Piano Concerto, and has also appeared at the Merkin Concert Hall and the Avery Fisher Hall at Lincoln Center. At home he has given performances at the Purcell Room, Wigmore Hall, Barbican Centre, and Royal Festival Hall in London, Usher Hall in Edinburgh, Glasgow Royal Concert Hall, and Symphony Hall in Birmingham. He has appeared as a soloist with the Royal Scottish National Orchestra, Copenhagen Philharmonic Orchestra, Toledo Symphony Orchestra, and Juilliard Symphony Orchestra, and worked with performers such as exclusive Chandos artist bassoonist Karen Geoghegan, the tenor Robert White, pianist Sara Buechner, and violinists Elmar Oliveira, Philippe Graffin, and Augustin Hadelich. In 2001, Philip Edward Fisher received the Julius Isserlis Award from The Royal Philharmonic Society in London.

[Pictures and Islamey] give him a chance to show off his virtuosity and assured technique...Still, the real interest here resides in the more modest works that come in between...This music may be light, but it still stands up to repeated listening.

Pictures is given a fine, muscular performance without being outstanding; Islamey boasts transparently clear textures at the expense of spine-tingling bravura...An interesting concept to have keyboard works from each of 'The Five' ranged alongside one another on the same disc

It was a good idea to group the piano works of five composers who played a vital role in the evolution of Russian music, for they offer variety aplenty.
In “Pictures at an Exhibition” Fisher’s easy-on-the-ear musicality more than compensates for his lack of temperamental swagger and thunderous tone.

Fisher's decision to fashion a recital from the works of all five has considerable appeal.Their piano music varies in quality, however...Borodin's Petite Suite comes over as a work of exquisite grace and melodic charm that deserves to be much better known. It suits Fisher's refined style rather well, too. As with the music, so his playing tends to variability. Islamey is dazzling. Pictures is very reined in and meditative

Fisher gives thoroughly compelling performances of both Pictures and Islamey, finding apt characterisation and colour in the Mussorgsky without falling into the trap, as some pianists have done, of trying to reinvent the music...[Islamey] comes across with a winning mix of allure and brilliance. the disc reveals an intriguing facet of a coterie of composers generally remembered for their orchestral music and operas.