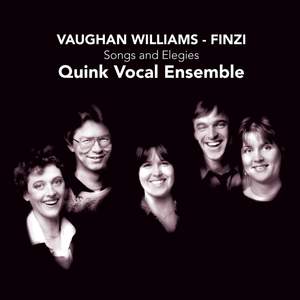 Vaughan Williams: Ring out your bells

Vaughan Williams: Love is a Sickness

Vaughan Williams: Fain Would I Change That Note

Life a right shadow is

This world a hunting is

This life which seems so fair

I praise the tender flower

I have loved flowers that fade

My spirit sang all day

Haste on, my joys!

Wherefore to-night so full of care

This album of songs and elegies by Vaughan-Williams and Finzi is performed by the highly-regarded vocal ensemble Quink. Featured works include Finzi’s Three Short Elegies, and Seven Poems of Robert Bridges.

Since its debut in 1978, the Dutch vocal ensemble Quink has risen to the top of its field and is invited to perform on prestigious concert series around the world. These five professional singers have developed a unique sound which allows them to illustrate with style and expressiveness the great variety of a cappella music. Quink's repertoire varies widely and consists of a cappella music from the Renaissance and Baroque eras, as well as works by Romantic composers. The ensemble often performs folk song and close harmony arrangements and it concludes its performances with lighter arrangements. Quink has introduced many new works both of established and modern masters. A number of contemporary Dutch, German and American compositions have been dedicated to Quink.

This particular release, a reissue of a CD from 1993, is now being made available through the group’s current record label Challenge Classics. The collection of songs by Ralph Vaughan Williams featured here are representative of the composer’s fascination with English folk music, and his belief that it was one of the strongest roots of English musical culture. The composer Gerald Finzi was a friend and great admirer of Vaughan Williams and his music was greatly influenced by him. Finzi was pre-eminently a composer of songs, and his character is clearly seen in his compositions, at times energetic and forceful, at other times gentle and reflective.