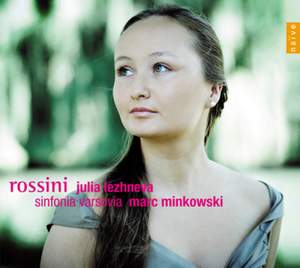 there is real flair and talent here, with much of the coloratura neatly despatched, and some stylistic grace that is admirable...Minkowski and his Polish musicians are marvellous, especially... — BBC Music Magazine, June 2011, 3 out of 5 stars More…

Katherine enjoys a hugely promising debut solo album from the Russian soprano (who was just nineteen when the recording was made), including arias from La cenerentola, La donna del lago and Guillaume Tell with Marc Minkowski and Sinfonia Varsovia.

A star is born! The Russian soprano Julia Lezhneva is the vocal revelation that everyone is talking about. Still only 21, a protégée of Dame Kiri Te Kanawa and the winner of several major awards, Lezhneva makes her solo recital debut with a programme of arias by Rossini, a composer of whom is particularly fond. She is accompanied by the Sinfonia Varsovia conducted by its new artistic director Marc Minkowski.

In October 2010 she confirmed her status as one of the world’s most exciting talents by winning the First International Opera Competition held at the Theatre des Champs-Elysees in Paris. Her performance in the recent Naïve recording of Vivaldi’s opera Ottone in Villa, conducted by Giovanni Antonini, has been praised to the skies by the international press. Her debut solo concerts at the 2010 Salzburg Festival with the Mozarteum Orchestra and Marc Minkowski likewise achieved extraordinary success. Minkowski has followed the young singer’s career closely; it was he who invited her in 2009 to take part in Bach’s B minor Mass, her first recording, and in summer 2011 she will sing the part of Fiordiligi under his baton in a new production of Mozart’s Così fan tutte at Salzburg. Despite her youth, Julia Lezhneva has a huge and extremely varied repertoire, ranging from the Baroque and bel canto styles to Romantic and contemporary music.

there is real flair and talent here, with much of the coloratura neatly despatched, and some stylistic grace that is admirable...Minkowski and his Polish musicians are marvellous, especially in a knockout account of the Cenerentola overture.

she delivers truly heart-stopping versions of the coloratura showpieces...Marc Minkowski's conducting is full of joie de vivre and sparkle too.

a pure, pellucid soprano with an intriguing hint of mezzo plangency, fluent movement between the registers, and scintillating (if faintly aspirated) coloratura...this is a highly enjoyable debut recital, by turns affecting exhilarating, from a soprano of impressive accomplishment and still more exciting potential. Orchestral accompaniments are trim and alert

She has attractively full tone in the lower middle, where much of the music lies, and she possesses the flexibility to negotiate exceedingly challenging coloratura...[Minkowski] should lead Rossini more frequently - his vigour, intelligence and sheer polish are most welcome here.

the first thing which impresses is the range of vocal colour and unforced fullness of tone – I hesitate to say ‘maturity’, because the basic sound is so unfailingly fresh and even, with no hint of any pressure, wobble or precocious fruitiness even in the lower reaches of this demanding programme...But what really makes this disc special for me is the sheer infectious joy which Lezhneva conveys in singing this music.

The 21-year-old Russian soprano — winner of Finland’s prestigious Mirjam Helin singing competition in 2009 — is clearly a name to watch. Hers is a bright, high soprano of limpid timbre and an easy coloratura technique

Her sense of line is unquestionably superb, as is her technique: there are trills and staccatos here, the likes of which we hear all too rarely.

Lezhneva's voice is perfectly suited to a flamboyant coloratura piece such as "Tanti Affetti", from La Donna del Iago, with her tiptoeing trills teetering delicately along. But the standout here is "Assisa a' piè d'un salice...for which the liquid harp glissandi and subtle strings of the Sinfonia Varsovia provide the most delightful, sensitive setting.

she sings with pinpoint accuracy, real elegance and musicality, and the voice itself is warm and round and womanly and beautifully clean...there is a gorgeous relaxed feel to her singing...This lovely disc, neatly accompanied by Marc Minkowski and the Sinfonia Varsovia, is genuinely the herald of a special new voice.

Lezhneva’s vibrant pyrotechnics during "Tanti affeti" from La donna del lago are as wittily entertaining as they are musically appropriate...There’s crisp support from the Warsaw chorus and effortless, gossamer-light orchestral backing. Remarkable indeed.