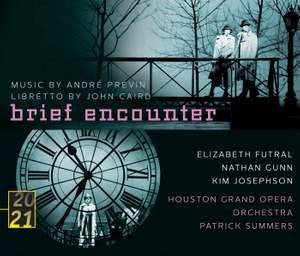 both appealing and frequently impressive...Somewhere between Puccini and Britten at their most intimate, it isn't wildly original, but it's entirely listenable...Elizabeth Futral's clear but... — BBC Music Magazine, July 2011, 4 out of 5 stars More…

Interlude ... "We walked together up the river"

"We walked back to the station" ... "This marriage lark"

"I sat in the café, waiting"

"The British have always been nice to mad people"

"When I was a child"

"This is the face of a woman who lies"

"He took me to lunch"

"We stood on the bridge at Eden Lock"

"Hallo!" "This is the face of the woman I love"

"Promise me, however unhappy your are"

"A woman is sitting in a quiet room"

The lengthy list of André Previn’s talents includes composition. Brief Encounter, his second opera, is a compassionate, exquisitely touching study of emotional infidelity. This release was recorded live at the opera’s world premiere in 2009.

Based on the screenplay by Noël Coward (that became a memorable film directed by David Lean and starring Trevor Howard and Celia Johnson), Brief Encounter stars Elizabeth Futral and Nathan Gunn as lovers whose innate morality makes their rapturous gratitude for one another excruciating, since they are already wed to others. Kim Josephson is moving as Laura’s bewildered husband; Patrick Summers conducts with his customary intelligence.

The Wall Street Journal wrote: “Mr. Previn’s lush, tonal score supplies a new dimension to this tale, giving a voice to the yearnings of Laura, the ordinary woman who is suddenly catapulted into extraordinary feelings”.

both appealing and frequently impressive...Somewhere between Puccini and Britten at their most intimate, it isn't wildly original, but it's entirely listenable...Elizabeth Futral's clear but well-shaded soprano suits Laura's quietly anguished lyricism, while baritone Nathan Gunn, a younger, less world-weary Alec than Trevor Howard, projects sturdy charm throughout an almost tenorial range.

The opera's grand dimensions and intimate manner are a challenge for anyone playing the lead characters...Futral achieves a degree of emotional specificity that makes her one of the best singing actresses around. Nathan Gunn matches her with a baritone that scales down to practically nothing - important in a love story in which the man is the needier of the two.

[Previn] deploys his orchestral forces with considerable tact. The music is lyrical, romantically bittersweet and often luxurious, but it's rarely overpowering...Still, Previn's Laura and Alec are more able to express their emotions than Coward's originals were...Futral is a virtuoso singer with a gorgeous tone...but she never shows off, maintaining a strong sense of Laura's repressed and self-critical character...warmly recommended to those interested in contemporary but accessible opera.

here are plenty of echoes of Samuel Barber – both Knoxville and Vanessa come to mind. He mercifully avoids referring to Rachmaninov, though the melodic contours of the principal love theme are reminiscent of its counterpart in Prokofiev's Romeo and Juliet...The performance...is conducted with considerable flair by Patrick Summers, while Nathan Gunn and Elizabeth Futral are superb as the sorrowing lovers.

Previn doesn’t achieve pastiche Rachmaninov, but the older composer’s ghost is audible in the opera, along with little twists of Bernstein and Hollywood scores of the 1940s. The score is neither showy nor outstandingly imaginative; but then, the same is true of Coward’s characters. Captured on CD, this intimate piece proves fascinating, largely enjoyable, and eventually touching.

This is a commendably sober, faithful retelling. Previn’s defiantly tonal score sounds exactly as you’d imagine it would – an amalgam of all the composers who he’s remembered for conducting well...Previn’s vocal writing is gracious, the orchestra is handled brilliantly, and Caird’s text is unfussy and elegant. This is an opera which it’s very hard to dislike, and it’s easy to imagine a good production packing a powerful emotional punch.