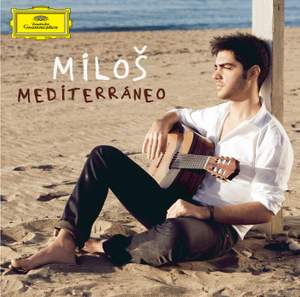 Karadaglic can articulate rapidly with the best of them, but what stands out even in busy textures is an unshakably serene breadth of phrasing, fluent rhythm and unforced rubato...Nor does he... — BBC Music Magazine, May 2011, 5 out of 5 stars More…

‘The music on this CD reflects my character. It tells the listener who I am.’ Miloš Karadaglić

Charismatic guitarist Miloš Karadaglić debuts on Deutsche Grammophon with an album saluting his instrument’s Mediterranean heritage. Born in the Balkan state of Montenegro, Miloš’s love-affair with the guitar began when he was eight, when his father played him a recording of Segovia making magic with Albeniz’s ‘Asturias’. Miloš gave his first public performance at nine, entered (and won) his first national competition at eleven. He became a star performer on television and radio, took guitar master-classes in Belgrade, and then, shortly after the end of the Balkan war, decided to try for a scholarship at London’s Royal Academy of Muisic.

Miloš’s choices of solo repertoire as well as music for guitar and orchestra are guaranteed to appeal to all lovers of guitar, classical and non-classical alike.

“He punched through this trio of ballads (El Decamerón Negro) with an innate poise and elegance that made you sit up and listen . . . And then the firecracker: A superbly inflected, impeccably judged rendition of Ginastera’s Sonata − a giant tapestry of sound combining luminous melancholy and bravura energy” (The Times)

The DVD features a 30min documentary with footage filmed in Montenegro and London. The film brings Miloš’s inspirational story to light, an evocative and beautifully photographed piece that explores his background and how he came to be who he is today. It will showcase Miloš’s talent, his style of play and unique approach to classical guitar and his desire to redefine it as a contemporary instrument. Miloš wants to make classical guitar matter; he wants us to fall in love with its beauty and raw passion and bring new audiences to its repertoire.

The film will not just focus on Miloš the guitarist, but also the person behind the guitar. This will build a bridge between the human story and music, giving the viewer an opportunity to get to know a young man from Montenegro and how each stage of his life has contributed to bringing him to this point.

Karadaglic can articulate rapidly with the best of them, but what stands out even in busy textures is an unshakably serene breadth of phrasing, fluent rhythm and unforced rubato...Nor does he need to draw attention to his own virtuosity, and his music-making is all the more absorbing for it.

Karadaglić demonstrates exemplary technical skill and command of the instrument, musical flair and some really arresting and unusual tone colours in the style of his hero Julian Bream...He's at his most impressive and exciting in the transcriptions of piano works by Albeniz - Asturias and Granada - where his brilliant technique is evident.

there are masterpieces here: classic arrangements of piano pieces from Albeniz’s Suite espagnola and Granados’s Danzas espagnolas, dazzlingly played, and works by the contemporary composers Carlo Domeniconi and Mikis Theodorakis that emphasise the Islamic influence on this essentially Mediterranean music.

Understandably, he focuses mainly on the instrument's Iberian heritage, with dextrous readings of the familiar Tárrega and Albéniz standards: the latter's Asturias is delivered with poise and clarity, while the superb trilling triplets of Tárrega's Recuerdos de la Alhambra are perfectly measured. Elsewhere, two tunes by Mikis Theodorakis offer a taste of the guitarist's Balkan heritage.

The playing is lithe, subtle of timbre and transcendentally beautiful.