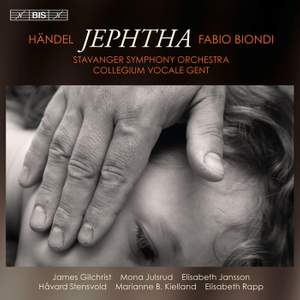 The expressive singing of Collegium Vocale Gent is one of the most attractive elements in Fabio Biondi's live recording of Jephtha. The choir sound more freethan they do under their founder,... — BBC Music Magazine, June 2011, 3 out of 5 stars More…

Act I Scene 1: Accompagnato: It must be so, or these vile Ammonites (Zebul)

Act I Scene 1: No more to Ammon's god and king (Chorus)

Act I Scene 2: Air: In gentle murmurs will I mourn (Storge)

Act I Scene 3: Recitative: I go, my soul, inspir'd by thy command (Hamor)

Act I Scene 3: Duet: These labours past, how happy we (Iphis, Hamor)

Act I Scene 4: Recitative: What mean these doubtful fancies of the brain? (Jephtha)

Act I Scene 7: Recitative: Such, Jephtha, was the haughty king's reply (Zebul, Jephtha)

Act I Scene 7: When his loud voice in thunder spoke (Chorus)

Act II Scene 2: In glory high, in might serene (Chorus)

Act II Scene 3: Accompagnato and Arioso: First perish thou, and perish all the world! - Let other creatures (Storge)

Act II Scene 3: Recitative: If such thy cruel purpose, lo, your friend (Hamor)

Act III Scene 1: Arioso: For ever blessed be Thy holy name (Jephtha)

Act III Scene 2: Quintet: All that is in Hamor mine (Iphis, Hamor, Storge, Jephtha, Zebul)

This recording was taking from a live performance at the Stavanger Concert Hall in 2008 and boasts a roster of soloists headed by the fine British tenor James Gilchrist as Jephtha.

The eminent Belgian choir Collegium Vocale Gent, is accompanied by the Stavanger Symphony Orchestra and at the helm of these large forces is Fabio Biondi, the Baroque violinist and conductor who since 2005 has been artistic director of the Stavanger orchestra in the baroque and classical repertoires.

Jephtha was Handel's last oratorio, and indeed his last major work due to the deterioration of his eyesight. It is nevertheless no less a masterpiece than his earlier works, and contains some of his noblest music.

The plot of this ‘Sacred Drama’ is loosely based on the story of Jephtha in the Old Testament: a father who in order to win the the Israelites’ struggle against the Ammonites makes a rash promise to God, and after his victory is compelled to sacrifice his own daughter.

“...He (James Gilchrist) is now unsurpassed among lyric tenors in sweetness and technical security, and for his musical intelligence.” The Independent

The expressive singing of Collegium Vocale Gent is one of the most attractive elements in Fabio Biondi's live recording of Jephtha. The choir sound more freethan they do under their founder, Philippe Herreweghe...Biondi is a meticulous orchestral trainer. Stavanger Symphony Orchestra adapts well to the stylistic demands of this work

The Stavanger Symphony Orchestra plays modern instruments in an authoritative baroque style; the crisp overture is neatly detailed...Gilchrist's rapid passagework and florid cadenza in "His mighty arm" are marvellous. The Norwegians Marianne B Kielland and Mona Julsrud are on vibrant form in the love duet "These labours past"

Biondi is always a dramatically alert Handelian...I can't fault Gilchrist's beautiful singing of 'Waft her, angels'...It's the crowning moment of a very fine performance. Norwegian soprano Mona Julsrud's bright bell-like tone is perfect for Iphis's 'The smiling dawn of happy days' and 'Tune the soft melodious flute' and there is genuine poignancy as she faces the sacrificial knife.

this spirited live performance is to be welcomed. James Gilchrist makes a stylish Jephtha, adequately supported by Scandinavian soloists. But the best singing comes from the Collegium Vocale Gent, which is stunning in the magnificent choruses.