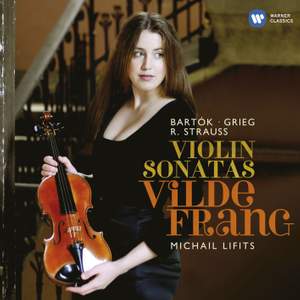 Vilde Frang's micro-sensitive responses to dynamic, articulation and phrasing...prove a revelation in the heady opulence of the Strauss, which has never sounded so urgently seductive or expressively... — Classic FM Magazine, May 2011, 5 out of 5 stars More…

One of the leading young soloists to emerge from Scandinavia in recent years, noted particularly for her superb musical expression, as well as her well-developed virtuosity and musicality.

Young Norwegian violinist, Vilde Frang brings together a diverse, yet complimentary selection of sonatas for her second EMI Classics release. The recording is available on CD and digital download from 7° March, 2011.

The youthful, spirited Grieg: Violin Sonata No.1 in F Major, Op. 8 and Richard Strauss: Violin Sonata in E-flat Major, Op. 18 are paired with Bartók’s technically challenging, musically complex Sonata for Solo Violin, BB 124, Sz. 117. Frang frequently performs the later, which Bartók composed as an homage to Bach, with the Strauss in concert. Vilde is joined by pianist Michail Lifits for this recording

Vilde’s debut recording, Sibelius and Prokofiev: Violin Concertos at 22, received wide-spread critical acclaim. The Financial Times wrote “rarely has this music sounded so tender, so intimate or so lyrical” while Independent Record Review called her “prodigiously gifted”. Vilde has been compared to a young Anne-Sophie Mutter, her mentor, with whom she often performs.

Vilde Frang's micro-sensitive responses to dynamic, articulation and phrasing...prove a revelation in the heady opulence of the Strauss, which has never sounded so urgently seductive or expressively supple on disc...Finest of all is Bartók's fiendishly demanding Solo Sonata, a virtuoso minefield of technical and musical ingenuity which Frang negotiates with an unflinching sense of musical direction.

Though Frang's tone generally appears quite light and silvery, she has ample reserves, and none of the climactic moments [in the Strauss] disappoint......In the Bartók I was immediately struck by Frang's fine rhythmic sense and varied tonal palette. Her playing has the necessary physicality for Bartók, without ever appearing forced...overall it's a top-class performance and, indeed, the whole programme is clearly a winner.

This is a singularly impressive recital, both for the choice of music - a mixed programme that works very well as a continuous listen...in which the performances are really quite compelling. Such commanding interpretations are made the more so by the musicians being ideally recorded...This is a spectacularly fine disc of unhackneyed repertoire in richly expressive performances.

In Grieg’s youthful Sonata in F she’s feisty and poetic as the mood turns, with effortless flourishes. Strauss’s equally youthful Sonata in E billows with prodigal invention...[The Bartok is] strongly dispatched with plenty of muscle and heart. Adroit, impassioned, never shallow, Frang is the real thing.

Frang plays with astonishing dexterity and musicianship, putting paid to the notion that only Hungarian musicians can play Bartok with any real understanding. This is a quite compelling performance.