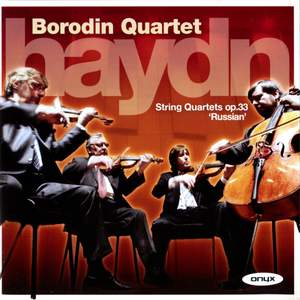 readings that are remarkable for their consistency of tone and security of technique. They rattle off fast movements with élan...and serve slow movements well with their rapt concentration — Gramophone Magazine, July 2011 More…

This release marks the Borodin’s third CD for ONYX.

Haydn composed his six string quartets op.33 between 1778 and 1781. He wrote that he had composed them ‘in a new and special way’. This was a rather mischievous claim, as the quartets do not represent a revolutionary compositional advance, rather a shift in style towards intimacy and subtlely from the flamboyant op.20 set of nearly ten years earlier. It was, though, a rather good promotional and sales gimmick on Haydn’s part.

These quartets are the lightest and most humorous in nature of all his mature quartets and do break new ground in having scherzos in place of the old minuet. This new term and the nature of the scherzo would appeal in a few years time to Haydn’s young pupil from Bonn, Ludwig van Beethoven.

Good humour abounds throughout op.33, especially the repeated false ending to the finale of no.2, where Haydn was said to have made a bet with friends that there would be applause at several points before the work ended. The nickname ‘The Joke’ was quickly applied to this work.

readings that are remarkable for their consistency of tone and security of technique. They rattle off fast movements with élan...and serve slow movements well with their rapt concentration

What is most impressive is the Borodin's sensitivity to the Haydnesque features that lend the music its special character, most notably its wit, in the sense of both humour and imagination...In the Borodin's superb accounts, we are reminded of all [Haydn's] virtues in a way that comes closer to the heart of the music than do most of the other [performances] I have heard.