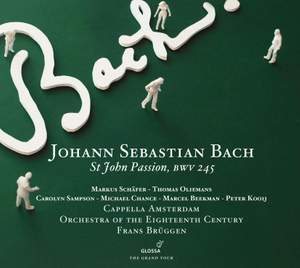 Brüggen bases this performance on the 1724 original version - retaining noticeably brisk tempos for the concluding chorus and chorale as though already party to the message of Easter...Beyond... — BBC Music Magazine, June 2011, 4 out of 5 stars More…

One of the many delights coming from Frans Brüggen’s distinguished career has been the understanding which he brings to the music of Johann Sebastian Bach – such as here with the St. John Passion – whether on the concert platform or on record. Brüggen’s cultured feeling for Bach’s musical structures as much as for its style and expressive content permits a textural clarity enjoyed by few of his directing colleagues. A special wealth of experience in the music of Bach has also been gained by the members of the Orchestra of the Eighteenth Century across the three decades of its existence and as part of its regular concert series (there have now been over a hundred of these tours!) and with a concentrated opportunity to focus on one work, Bach’s masterpiece was performed and recorded in Spring 2010.

Also of special note on this new recording is the presence of a solo group comprising both distinguished and rising talents, led by Markus Schäfer as the Evangelist and Thomas Oliemans as Jesus, and with Michael Chance and Marcel Beekman singing arias together with the added luxury of the present-day 'Bach bass' par excellence in Peter Kooij and the radiant-voiced Carolyn Sampson. Choral support comes from the Cappella Amsterdam, also present (as was Peter Kooij) on another of Frans Brüggen’s recent revisitings for Glossa and The Grand Tour of the glories of Bach’s choral music, the B minor Mass.

Brüggen bases this performance on the 1724 original version - retaining noticeably brisk tempos for the concluding chorus and chorale as though already party to the message of Easter...Beyond praise...is Carolyn Sampson whose two arias are utterly spell-binding, and at an almost dangerously slow tempo, the alto and gamba 'Es ist vollbracht' entwinings of Michael Chance and Rainer Zipperling hang plangently in the air, an epiphany of unassuageable grief

This 'live' recording will gladden the heart of anyone who is weary of the small-scale, one-to-a-part performances that have become fashionable in recent years. Cappella Amsterdam numbers only 24 singers but they produce plenty of decibels when required...Schäfer paces his recitatives well, his tone reminiscent of Peter Schreier's...Carolyn Sampson dispatches her two arias in style.

This is a most moving performance. It is beautifully conducted by Franz Brüggen, unfolding with a natural expressiveness that is never short on drama but avoid the slash-and-burn vigour of some other period-instruments versions...Schäfer is a most involving story-teller - this is a really vibrant narrative, but he creates urgency without reosting to any expressive extremes...This is a very special recording