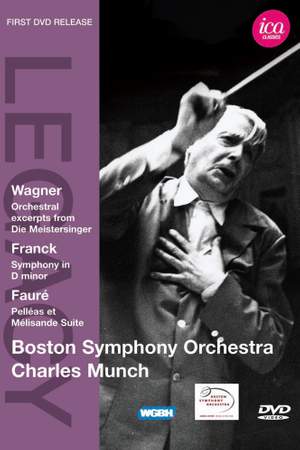 Munch was noted for his performances of French music and the [Franck] is treasure indeed...searing, warm-blooded and slightly brisker than Monteux's benchmark recording made the same year with... — Gramophone Magazine, September 2011 More…

Access to the publicly broadcast BSO concerts from this era has been extremely difficult even for researchers. This series of DVDs will make these performances available for the first time since they were broadcast. Munch launched the BSO into television in 1955. He was an immensely popular conductor and well suited to being filmed.

This material represents some of the earliest televised concerts with the Boston Symphony and Charles Munch, and has been restored using the greatest care and state-of-the-art techniques. It is of exceptional musical interest and historical value.

‘Munch handles the Wagner in a masterly, memorable and deeply human manner, with great depth of tone and feeling.’ (Richard Dyer). Fauré’s Pelléas and Mélisande is quintessentially French, repertoire for which Munch was best known – his recordings of French repertoire remain a permanent standard of reference. The Fauré was performed by Munch and the BSO no fewer than 23 times between 1947 and 1966, and according to the announcer, Bill Pierce, proceeds like ‘well-bred discourse’.

Munch was noted for his performances of French music and the [Franck] is treasure indeed...searing, warm-blooded and slightly brisker than Monteux's benchmark recording made the same year with the Chicago Symphony.