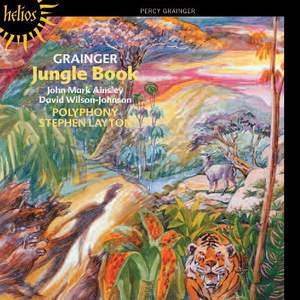 Grainger's cycle evokes the lyrical side of Kipling's animal tales. As with the coupled folk arrangements, it's beautifully sung. — BBC Music Magazine, December 2011, 4 out of 5 stars More…

I. The fall of the stone

II. Morning song in the jungle

III. Night-song in the jungle

V. The beaches of Lukannon

X. The only son

Grainger: The Power of Love

Grainger: The Sprig of Thyme

Grainger: The running of shindand

Grainger: My Love's in Germanie

This reissue commemorates the 50th anniversary of Grainger’s death in February 1961.

Grainger’s Jungle Book cycle was recorded here (for the original Hyperion release) for the first time. The eleven contrasting movements vividly portray the sentiments of Kipling’s poetry and Grainger wrote of the cycle that it was ‘composed as a protest against civilization’.

Grainger's cycle evokes the lyrical side of Kipling's animal tales. As with the coupled folk arrangements, it's beautifully sung.

This disc offers a sympathetic, endearing portrait of a composer too often valued for his wackiness and eccentricity alone

Unquestionably an important and relishable release