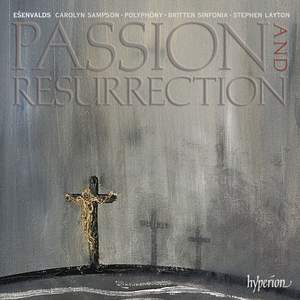 Ešenvalds responds to the purpose of the words he sets, occupying similar choral territory to the likes of Whitacre and Shchedrin, character rather than ego dominating. Carolyn Sampson is the... — BBC Music Magazine, May 2011, 4 out of 5 stars More…

II. My soul is very sorrowful

III. At thy mystic Supper

Ešenvalds: Night Prayer: Mistress of night watching down on me

Ešenvalds: A Drop in the Ocean

Ešenvalds: Legend of the walled-in woman: Atje te ura në lumë 'There at the bridge o'er the river'

Ešenvalds: Long Road: I love you night and day

‘Rarely before have I sat in a concert hall and heard a new work that sounded so fresh yet so familiar … Ešenvalds Passion and Resurrection is surely set to become a classic, a position Hyperion’s forthcoming CD release of the work should consolidate’ (On an Overgrown Path).

The live performance last year of this major and substantial work by the young Latvian composer Ešenvalds thrilled critics and audiences alike. As a new liturgical work that looks set to enter the repertoire it is comparable to Arvo Pärt’s Passio.

Eschewing the single narrative perspective that characterizes the great Passion settings of the past, the composer has assembled an interlocking mosaic of texts from the gospels, from Byzantine and Roman liturgies, and from the Old Testament.

Stephen Layton’s commitment to new Baltic music is well-known and he has a deep understanding of the musical language of the area – reflected by performances of great integrity and passion. This recording is particularly splendid, featuring not only the matchless Polyphony and Britten Sinfonia but also Carolyn Sampson, acclaimed for her performances of early music on Hyperion but heard here to dazzling effect, crowning the performance with her extraordinary singing.

Ešenvalds responds to the purpose of the words he sets, occupying similar choral territory to the likes of Whitacre and Shchedrin, character rather than ego dominating. Carolyn Sampson is the featured guest on the title piece and sings superbly, but there is also very fine work by soloists from within Polyphony, particularly the sopranos...Polyphony typically balances beauty of timbre with precise articulation and empathy with the texts

The star is soprano Carolyn Sampson, whose rich timbre and effortless ascents into the stratosphere crown this splendid performance.

Within seconds I knew I was going to adore this disc...everything here has in common a wonderful sincerity of expression and a shimmering sense of colour...If the music wasn't so utterly gorgeous, I would happily devote several hundred words to praising Stephen Layton for these totally absorbing performances.