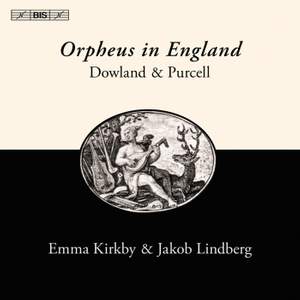 Supported with exceptional clarity by Jakob Lindberg, Kirkby conveys both intellectual appreciation and a deep emotional connection with the words in this recital...[her] 'Bess of Bedlam' is... — BBC Music Magazine, March 2011, 4 out of 5 stars More…

Dowland: Book of Songs, Book 2: Disdain me still, that I may ever love

Dowland: Book of Songs, Book 3: Lend your ears to my sorrow, good people

Varietie of Lute Lessons, II. The Right Honourable Earl of Essex, His Galliard (42a)

Dowland: A Shepherd in a Shade

Dowland: The Third and Last Booke of Songs or Aires: By a fountain where I lay

Dowland: A Pilgrimes Solace: If that a sinner's sighs be angel's food

Varietie of Lute Lessons: X. A Fantasie (1a)

Dowland: Book of Songs, Book 2: Toss not my soul

Book of Songs, Book 4, "A Pilgrimes Solace": In darkness let me dwell

The Indian Queen, Z. 630, Act IV: They Tell Us That Your Mighty Powers (arr. for soprano and lute)

Emma Kirkby and Jakob Lindberg have devised a programme which takes in a wide spectrum of emotions: from the pastoral joyfulness of By a fountain and the melancholy of In darkness let me dwell, we are led via the desperation and drama of Bess of Bedlam to the conviction expressed in Music for a while that music has the power to vanquish even death. Interspersing the songs are lute solos, including Dowland’s immortal Lachrimae, but also Lindberg’s own transcriptions of Purcell pieces such as The Cibell and the Echo Dance of the Furies from Dido and Aeneas, performed on Lindberg’s unique four-hundred year old instrument. Kirkby and Lindberg are musical partners of long standing, with earlier collaborations on BIS including Musique and Sweet Poetrie (BISSACD1505), a survey of the lute song across Europe around the year 1600. ‘A grand tour conducted by a pair of ideal guides’ was how the reviewer in Gramophone described that disc, while his colleague in International Record Review found that the ‘undeniably glorious performances’ made the disc ‘a journey well worth making’.

Supported with exceptional clarity by Jakob Lindberg, Kirkby conveys both intellectual appreciation and a deep emotional connection with the words in this recital...[her] 'Bess of Bedlam' is more sympathetic than most, and her 'Music for a While' is more enigmatic. The voice may be less beautiful than it was, but her singing is more beautiful than ever.

Few singers are quite a compelling with only a lute for company: Kirkby's phrasing has impeccable light and shade, and her authoritative articulation of melancholic sentiments is simply first-class...her gripping interpretation [of In darkness let me dwell] is devoid of complacence; moreover, her intonation and technique in florid music has lost none of its sparkle and precision.

Kirkby embellishes with taste and discretion...Both [she] and Lindberg are especially good here in the last Dowland item, 'In darkness let me dwell'...the tempo well judged, the lute part a translucent garment draped over Kirkby's highly expressive delivery.