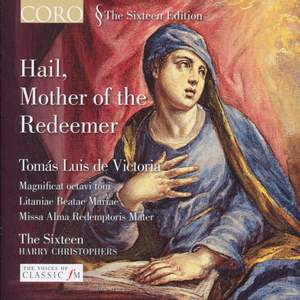 Offer, Hail, Mother of the Redeemer

Harry Christophers's love of Victoria suffuses this sumptuous recording...the seamless plainsong, searing climaxes, subtle dynamic shading and responsiveness to text is captivating. The fit between... — BBC Music Magazine, May 2011, 5 out of 5 stars More…

Harry Christophers and The Sixteen marks the 400th anniversary of the Spanish composer’s death with a ‘beautifully sung and superbly recorded’ new album centring on the Missa Alma Redemptoris Mater.

To celebrate the 400th anniversary of his death, this brand new recording is devoted to one the great masters of the Spanish Renaissance - Tomás Luis de Victoria.

Priest, scholar, mystic, singer, organist and composer - six persons all rolled into one. That is, quite simply, why Victoria is the most outstanding composer of the Renaissance.

Five years ago, Harry Christophers and The Sixteen recorded and toured a brand new version of Victoria’s Requiem to sold-out venues across the UK. The ensemble will continue its exploration of the music of this great Spanish composer in 2011 bringing his unique sound to ever wider audiences. To mark the 400th anniversary of his death, a brand new recording of works by Victoria will be released in February. On this recording, The Sixteen explores some of the sumptuous music Victoria wrote in honour of the Virgin Mary. Whilst his glorious Missa Alma Redemptoris Mater forms the central part of the disc, it is the intensely beautiful Marian motets which define Victoria as the greatest composer of the Renaissance.

Harry Christophers's love of Victoria suffuses this sumptuous recording...the seamless plainsong, searing climaxes, subtle dynamic shading and responsiveness to text is captivating. The fit between the The Sixteen and the double choir format of much of the music is perfect. When divided, the choir sings as an intimate Renaissance ensemble, but when combined its power overflows Victoria's polyphonic lines.

One is immediately struck by the glow-in-the-dark warmth of the choir's sound; Missa Alma Redemptoris is opulent without ever collapsing into indulgence,and Christophers' carefully judged dynamic terracing and vocal balance is ideal for capturing Victoria's radiant intervals and floating frequencies...This is state-of-the-art Renaissance singing

Timing is everything: these performances always bring the gratifying sense of being created and refined in concert, working with and not against the resonance of a sacred space (All Hallows, Gospel Oak)...this disc celebrates the 400th anniversary of Victoria's death with a high majesty and temperature well suited to the occasion.

Victoria the contrapuntal genius is well understood by The Sixteen, as one can hear by the way the singers shape the melodic lines...with no sense of hurry, a real feeling for the way the chant in the Salve fits together with the polyphony, and an instinct for the precise weighting of chords at cadences...A more worthy tribute to this truly great composer is difficult to imagine.

The Sixteen sing with their usual well-blended polish and clarity.

Victoria could apply himself equally to the sublime contemplation of Sancta Maria and to the jubilant fervour of the Magnificat, a range of expression that the Sixteen embraces.