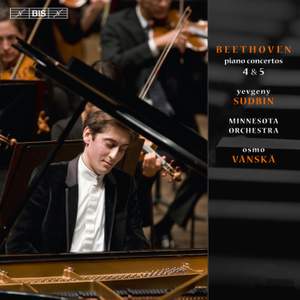 The clarity of Yevgeny Sudbin's playing, and the range of keyboard colours he commands are qualities that serve him as well in Beethoven as they did in his fine Scriabin recital for BIS a few... — BBC Music Magazine, April 2011, 4 out of 5 stars More…

After huge success with their cycle of Beethoven Symphonies on BIS, Osmo Vänskä and the Minnesota Orchestra return with the great composer’s Piano Concertos performed by the sensational young pianist Yevgeny Sudbin.

Sudbin made his début on disc with a programme of sonatas by Scarlatti, but soon continued with recordings of music by later composers from his own country of birth, Russia. He has recorded the Tchaikovsky Piano Concertos No.1, Medtner’s Concertos Nos. 1&2 and Rachmaninov No.4 2010 saw Sudbin’s return to the 18th century, with a Haydn recital that confirmed his reputation as a highly versatile musician. “Few seem as fresh and necessary as this release from this wonder pianist” The Times (5 Star review) on Sudbin’s Tchaikovsky/Medtner concertos

Opening with the composer’s final two works in the genre, Sudbin shares the stage with Minnesota Orchestra and Osmo Vänskä, a team whose Beethoven credentials are assured after their recent cycle of the nine symphonies which critics claimed to be one of the great Beethoven Cycles.

The clarity of Yevgeny Sudbin's playing, and the range of keyboard colours he commands are qualities that serve him as well in Beethoven as they did in his fine Scriabin recital for BIS a few years back. He is particularly successful here in the more intimate and chamber-like Fourth Concerto...There's much to like about Sudbin's Emperor, too. The Adagio is admirably luminous

Vänskä's lightness of touch - a cooler Beethoven than we're accustomed to, but peppered with artfully controlled explosions - is just what's needed to get inside the enigmatic Fourth, and his 'Emperor' is refreshingly restrained.

Sudbin brings delicacy and crystalline articulation to these concertos, creating a sense of classical grace rather than romantic scale... but his aristocratic mien and stylistic assurance...[add] a welcome degree of wit to the fourth concerto’s finale and a poise and sparkle to the Emperor...Osmo Vänskä and the Minnesota Orchestra prove equally sympathetic accompanists.

Sudbin makes it clear that he has little use for Beethoven weighed down, as it were, with excess baggage...Instead, his delectably light-fingered brilliance and virtuosity shines a new light on some of the most familiar scores in the repertoire...Such mercurial pianism keeps Vänskä and the Minnesota Orchestra on their toes but they follow their soloist as to the manor born.

Sudbin need not fear being heard in the context of pianists who are appreciably further on in their careers...In a crowded field [he] ranks near the top and it will be fascinating to hear how his cycle evolves over the remaining two installments. Highly recommended.