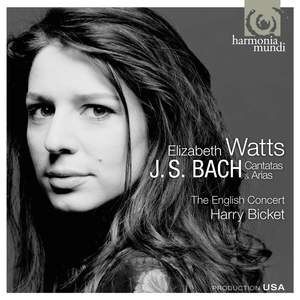 Elizabeth Watts, with her voice combining warmth and purity, is well suited to Bach's personal outpouring of both penitence and jubilation...[she] is on top form and the playing under Harry Bicket... — Classic FM Magazine, April 2011, 4 out of 5 stars More…

Winner of the 2006 Kathleen Ferrier Award and the 2007 Cardiff Song Prize, soprano Elizabeth Watts, makes her harmonia mundi début in a luminous programme of Bach cantatas and arias, deftly supported by The English Concert, led by Harry Bicket.

With a voice described by International Record Review as “one of the most beautiful Britain has produced in a generation”, Elizabeth Watts is now securely established as “one of the brightest new talents” (The Independent). After training as a chorister at Norwich Cathedral, Elizabeth went on to study archaeology at Sheffield University before attending the Royal College of Music in London. Her many prizes include the 2006 Kathleen Ferrier Prize (UK), the 2007 Outstanding Young Artist Award at the Cannes MIDEM Classique Awards and the Rosenblatt Recital Song Prize at the 2007 BBC Cardiff Singer of the World Competition. A former ‘BBC New Generation Artist’, she was invited to become an Artist in Residence at London’s Southbank Centre in 2010. Now equally in demand as a recitalist, opera singer, and concert artist, she has already appeared at many of the world’s leading musical centres and festivals, including the Royal Opera House, London, Wigmore Hall, Welsh National Opera, the BBC Proms, Santa Fe Opera, Boston’s Handel and Haydn Society, and has upcoming engagements throughout Europe from Amsterdam to Zurich.

Internationally renowned conductor Harry Bicket is especially noted for his interpretation of Baroque and Classical repertoire. In 2007 he became Artistic Director of The English Concert, which he has led on tours in the UK, USA, Europe and the Middle East.

He has won high praise world wide for his work in opera, including at The Royal Opera Covent Garden, Glyndebourne Festival, Opera North, Bayerische Staatsoper Munich, and Gran Teatre del Liceu, Barcelona. He made his debut at The Metropolitan Opera in 2004 in a new production of Rodelinda with Renée Fleming and David Daniels, and returned to conduct Giulio Cesare in 2006 and La clemenza di Tito in 2008.

Future projects with The English Concert include a recording featuring Lucy Crowe for harmonia mundi.

Elizabeth Watts, with her voice combining warmth and purity, is well suited to Bach's personal outpouring of both penitence and jubilation...[she] is on top form and the playing under Harry Bicket is equally fine.

Watts's smouldering vocal apporach to the text is deeply involving rather than merely lovely...Bicket's pacing allows the orchestral accompaniment to be both lively and detailed, and even if Watts's gutsy abandon might not cater for all tastes, her gleeful dialogue with Mark Bennett's meaty trumpet-playing in the finale [of Jauchzet Gott] has plenty of ballsy jubilation.

this is a performance which mixes sumptuousness and refinement with impeccable poise and style...Bicket's approach is so gloriously relaxed and expansive that the music seems to float timelessly in the air like so much arresting perfume...I am now convinced that Watts is as authoritative and compelling a Bach soprano as you will find anywhere today.