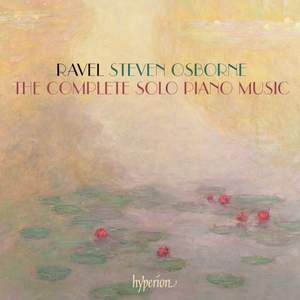 Ravel essentially reimagined how to write for the piano with each significant work. Osborne is more than up to the task...Throughout, [he] repeatedly demonstrates not merely that these performances... — BBC Music Magazine, May 2011, 5 out of 5 stars More…

James spends some nights in the gardens of Spain in the company of Steven Osborne and the BBC Scottish Symphony Orchestra.

New releases of Steven Osborne’s best-selling discs have become some of the most eagerly-awaited events in the pianophile diary. This most delicate and subtle of musicians also displays a pyrotechnical deployment of digital acrobatics, mesmerising colour control and breathtaking articulation. All these qualities are visible in this two-disc set of some of the most important piano music of the early twentieth century. Ravel’s works have been central, too, to Steven Osborne’s performing repertoire throughout his career, making this set a perfect marriage of composer and performer.

Ravel essentially reimagined how to write for the piano with each significant work. Osborne is more than up to the task...Throughout, [he] repeatedly demonstrates not merely that these performances stand with the best, but also that comparisons are superfluous in the face of such a compelling vision...His sustaining of the 'Epilogue' is magical, as if not wishing to relinquish the spell of this recital. It is over all too soon.

His tempos, kaleidoscopic tonal colouring, textual clarity, and amazing dynamic range and variety of touch manifest an innate empathy with the composer...These are inspired performances with Award Winner written all over them. The perfectly-voiced piano, the venue/acoustic, producer and engineer, and an artist who was born to play Ravel combine to make the best complete Ravel cycle on disc.

A precise and balanced interpretation

[Gaspard] is technically immaculate...and gently seductive before turning on a more sinister pressure..."Alborada" from Miroirs is another striking success, where a trickster's ribaldry and high jinxs explode into violence, and in La Valse (suitably arranged and "orchestrated"), Osborne spins his dancers towards a visceral and devastating oblivion.

a remarkable account of Le Tombeau de Couperin, full of imaginative colours and immaculate technique. Osborne's performance of the original solo piano version of the Pavane pour une infante défunte is just magical, and as a bonus he includes Ravel's own transcription of La valse, a real tour de force in Osborne's hands.

Steven Osborne's survey of [Ravel] is an unqualified delight....His playing...is equally well suited to the delicate classicism of the Sonatine, the scene painting of Miroirs and the nostalgia for the 18th century in Le Tombeau de Couperin as it is to the more extrovert virtuosity of the Valses Nobles et Sentimentales.

Steven Osborne, ever a poised, technically impeccable virtuoso, combines clarity with heart. All a shimmering pleasure.

Steven Osborne brings his masterly interpretative acumen to bear with a touch and temperament that combine eloquence and deftness. Landmark works are set alongside various less frequently heard miniatures in performances that live and breathe Ravel’s distinctive world of sound, radiating luminous patterns and scintillating colour.