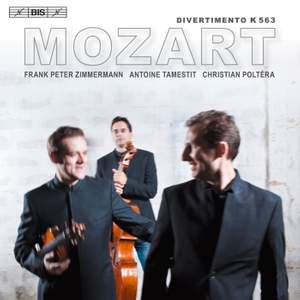 [Trio Zimmermann] narrow the gap between the learned and the popular...No detachment in Schubert's unfinished one-movement Trio either. The musicians are consistently sympathetic to changing... — Gramophone Magazine, April 2011 More…

BIS is delighted to release the debut recording of the star-studded ensemble, Trio Zimmermann, formed by Frank Peter Zimmermann, Antoine Tamestit and Christian Poltéra. Here they perform W.A. Mozart’s Divertimento in E flat major which the scholar Alfred Einstein described as ‘Each instrument is primus inter pares, every note is significant …’ Composed in the same year as the three final symphonies, Mozart’s only real trio for violin, viola and cello is a weighty work – six movements and close to 50 minutes of music – and the fact that Mozart chose the title Divertimento (from the Italian divertire: to amuse) for a piece of these dimensions has often been remarked upon.

To round off the disc, the trio perform Franz Schubert’s first contribution to the string trio genre, the opening – and only complete – movement (Allegro) of his String Trio in B flat major, D 471, written in 1816 by the nineteen-year-old composer.

[Trio Zimmermann] narrow the gap between the learned and the popular...No detachment in Schubert's unfinished one-movement Trio either. The musicians are consistently sympathetic to changing facets that reflect a 19-year-old composer trying to find his own voice. And BIS's SACD recording is throughout of a bloom and lucidity that captures the subtleties of performance.

The players of Trio Zimmermann do this Divertimento full justice. Tempos are well chosen, the two outer movements played to suggest an apt forward-pressing animation but never so fast as to cause blurring of rapidly articulated passages. Tonally, the group avoids unwanted lushness and prominent vibrato, thereby suggesting, without duplicating, an eighteenth-century sonority.

The Trio Zimmermann — led by another supremely Mozartian soloist, Frank Peter of that name — possibly outclasses the Grumiauxs in its leaner, keener approach to the shifts of mood, from serenity to turbulence, that darken Mozart’s diverting music. The trio movement by the 19-year-old Schubert is an attractive makeweight.

a considerable achievement, warmly recorded, scrupulously stylish and wonderfully generous in spirit. It's played by a trio who are not only all front-rank soloists in their own right, but chamber musicians who know how to listen intently to each other and to respond accordingly