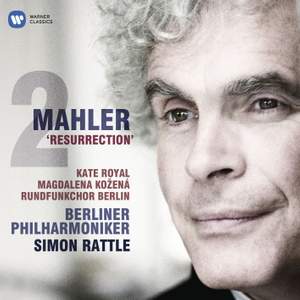 the post-holocaust enchantments are magically coloured. For anyone who cares about this symphony Rattle's new recording is essential listening, if not necessarily a first port of call...[he]... — BBC Music Magazine, March 2011, 4 out of 5 stars More…

24 years after his landmark recording of the ‘Resurrection’ Symphony with Dame Janet Baker and the City of Birmingham Symphony Orchestra, Rattle returns to the piece with the Berliner Philharmoniker, Kate Royal and Magdalena Kožená.

Gustav Mahler’s epic Symphony No. 2 ‘Resurrection’ with Simon Rattle and the Berliner Philharmoniker, the Rundfunkchor Berlin and star soloists Kate Royal and Magdalena Kožená was recorded in concert at Berlin’s Philharmonie in late October 2010 and will be released on CD by EMI Classics in February 2011.

The Symphony, scored for orchestra, soloists and chorus, tackles the great mysteries of life and death and was already among the most successful and popular of Mahler’s symphonies during his lifetime. Not only was the work premiered by the Berliner Philharmoniker (in 1895) but it is an important work in Simon Rattle’s musical trajectory. The partnership of Sir Simon and the BPO in Mahler’s Symphony No. 2 portends a ground-breaking new recording.

The concerts on October 28-30 form part of a Mahlerthon of sorts, in which the Berliner Philharmoniker will perform all the symphonies between August 2010 and the end of 2011 in commemoration of two Mahler anniversaries: the 150th anniversary of his birth (7 July 2010) and the centenary of his death (18 May 2011).

The symphonies of Gustav Mahler have been a central theme in Simon Rattle’s career. “[Mahler’s Symphony No 2] was the piece that made me take up conducting in the first place when I heard it in a live performance when I was 12. Mahler aimed to put the entire world into a symphony and this world goes from the death rights of some unnamed hero through a memory of what life was in both its beauty and its horror and final resurrection and redemption. It’s on a vast canvas with many, many performers and, for me, it is one of the most moving of all orchestral works.”

Simon Rattle’s Mahler symphony performances on disc have won enthusiastic critical praise over the years: “Where Simon Rattle's interpretation is concerned, we must go into the realm of such giant Mahlerians as Walter and Klemperer, dissimilar as they were. For we are dealing here with conducting akin to genius, with insights and instincts that cannot be measured with any old yardstick.” (Gramophone on the 1987 recording of the Symphony No. 2 with the CBSO, Arleen Auger and Dame Janet Baker); “A triumph…It can safely be ranked among the finest performances on record.” (Gramophone on the 2002 recording of Symphony No. 5 with the BPO); “The final ascent to the big blue yonder is surely unsurpassable - on both the sonic and interpretative fronts… There's no doubt, then, that Rattle has inspired all concerned to an achievement which joins his groundbreaking readings of the Third, Seventh and Tenth Symphonies in the Mahlerian heaven.” (BBC Music Magazine on the 2005 recording of the Symphony No. 8 ‘Symphony of a Thousand’ with the CBSO); “One of the finest interpretations on record of Mahler’s great unfinished symphony… Rattle supremely allies mesmerising detail to awesome scale in an intense, award-winning live account” (Classic FM Magazine on the 2000 recording of the Symphony No. 10 with the BPO).

the post-holocaust enchantments are magically coloured. For anyone who cares about this symphony Rattle's new recording is essential listening, if not necessarily a first port of call...[he] sets new standards with the light, shade and shock of his Berlin funeral rites which open the symphony.

Throughout [the opening], Rattle marshals his players enough to let the schizophrenic terror of the movement have its effect...Exultantly we are drawn onward, though, toward the inevitable choral closing section, which is positively heaven-sent when it finally arrives... in Rattle's hands it is supremely thrilling.

Kožená brings her customary depth of feeling to the still maternal voice of "Urlicht"...Rattle's famous piano-pianissimos are deployed to breathtaking effect, the choral passages (radiantly illuminated at the top by Kate Royal) sound pure, mysterious and very Bachian, and the returning resurrection hymn is tremendous

Rattle places considerable weight on this audacious conflation of tone-poem...and sonata-form...his is undoubtedly a reading of as well as for the present.

Rattle’s tempos have broadened slightly, but crucially they never feel self-indulgent, and indeed these broad tempos add to the majesty and grandeur of the performance...while there is still the incredible attention to detail which Rattle’s Mahler is renowned for – with intricate balance, careful phrasing and stunning dynamic contrasts...I think Rattle lets his Berlin players ‘play’ a little more than he did the CBSO.

the sound is almost miraculously analytical, and the combination of Rattle's attention to detail and the superlative playing of his great orchestra ensures that every morsel of Mahler's scoring makes its point.

Of course there’s much to admire. The BPO are on fantastic form, the recorded sound is sumptuous but clear and Rattle brings some new thoughts to the piece. The first movement is striking for its deliberate, almost stealthy beginning, and there’s a slow, almost dreamlike delicacy about the music.