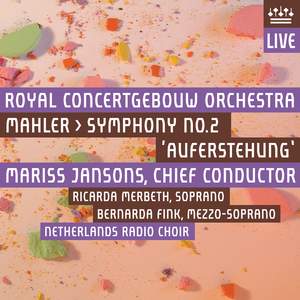 it's always a pleasure to hear warm Concertgebouw horns in noble ensemble, and the woodwind do beautiful things with the second of the heavenly visions in the [first] movement...Bernarda Fink... — BBC Music Magazine, March 2011, More…

The Royal Concertgebouw Orchestra is steadfastly progressing with its Mahler cycle under the direction of its chief conductor Mariss Jansons. Following its releases of the First, Fifth and Sixth Symphonies, the orchestra now turns its attention to the Second and Third Symphonies (scheduled releasedate: spring 2011).

Jansons and his Amsterdam-based orchestra performed the Symphonies Nos. 2 and 3 in the 2009–10 season as part of the full, chronological series of performances given by the Royal Concertgebouw Orchestra of Gustav Mahler’s symphonies to commemorate his 150th birthday and the 100th anniversary of his death. Once again, Jansons stands out in these performances with his astonishingly keen eye for the minutest of details. Like no other, Jansons possesses the ability to integrate all this into virtually infinite overarching climaxes that can make listening to Mahler’s symphonies such an exciting experience.

"Sometimes I do feel more extroverted when conducting Mahler, probably because the whole world is contained within his symphonies. From cradle to grave to rebirth, it’s all there. The Second Symphony is a wonderful example of that. With a composer like Tchaikovsky, it’s all about his own existence, his own difficulties and his own survival. I don’t mean to say that Tchaikovsky is limited, but Mahler succeeds in writing about himself and about the world.” “Obviously, I do hope I interpret Mahler’s symphonies better now than I did as a young man. But that’s not an easy thing to hear, at least not in my tempos, simply because I always choose the tempo I feel in the moment. In music, there’s no such thing as an absolute tempo. Even a composer’s metronome markings don’t tell the whole story. I learned that from Mravinsky. He would always shout, “You have to forget Shostakovich’s metronome.” That’s why I hate it when people insist that a particular performance was too slow or too fast. That’s just a subjective opinion – certainly not a universal truth. “This music is so rich that I hope I can bring audiences closer to heaven with it. I will have succeeded in my mission if listeners go home with the feeling of having been in another world for two hours.” Mariss Jansons

it's always a pleasure to hear warm Concertgebouw horns in noble ensemble, and the woodwind do beautiful things with the second of the heavenly visions in the [first] movement...Bernarda Fink is the model of feeling gravitas.

[Jansons] give it urgency, propulsion and tautness of form...Bernarda Fink is outstanding in the "Urlicht", where an aching first oboe sounds almost like a mystical overtone of her voice...With Jansons the cataclysms have real clarity - you can hear what's going on without compromising the sense of spontaneous combustion.

The Royal Concertgebouw proves once again what a consummate body it can be when thoroughly engaged. Orchestral playing is immaculately voiced, the soundscape superbly balanced, the work's shape presented in one sweeping arc and steered like a freshly polished, custom-built limousine.