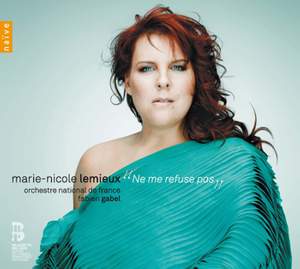 This procession of femmes fatales, schemers and innocents has a point to make, and it's not just the singer's ability to get under their skin...it shows them as part of a larger movement: the... — BBC Music Magazine, April 2011, 5 out of 5 stars More…

In 2000 the contralto Marie-Nicole Lemieux became the first Canadian to win the First Prize as well as the Special Prize for Lieder at the Queen Elisabeth International Music Competition in Belgium. She has recorded for numerous labels, and now enjoys an exclusive contract with the Naïve label, for which she has recorded the title roles in Vivaldi’s operas Griselda and Orlando furioso. Her first recital CD of French mélodies (L’Heure exquise) was much praised by the critics. In 2008 Naïve released a recording of Vivaldi sacred works in which she sings the famous Stabat Mater. This was followed by the same composer’s La fida ninfa. In 2009 Naïve released a recital of Schumann songs with the pianist Daniel Blumenthal and a programme of Vivaldi arias with the Ensemble Matheus under Jean-Christophe Spinosi.

The programme chosen for this recording by Marie-Nicole Lemieux is dedicated to the finest arias from the French opera, recorded with one of the finest orchestras in this repertoire and featuring both popular and more specialised works by, amongst others, Massenet, Berlioz, Saint-Saëns, and Bizet.

This procession of femmes fatales, schemers and innocents has a point to make, and it's not just the singer's ability to get under their skin...it shows them as part of a larger movement: the rise of the 19th-century French mezzo...Marie-Nicole Lemieux is equal to them all, adjusting vibrato and shading an essentially contralto colour according to dramatic demands.

This is an attractive record and its appeal may well be felt before a note of it is heard. Many who take a particular interest in singing find themselves drawn to the French repertoire...and this young singer - perhaps still new to some - so provocatively classified as "contralto" also has the kind of name and background that attract the attention of traditional record collectors.

[In the Letter Scene] Lemieux is awake to the changes of mood as she moves between a lovely quiet opening section to more ecstatic utterances. The interpretation is first-rate...The wistfulness and sense of longing with which Lemieux recalls Mignon's past are feelingly expressed...The playing under Fabien Gabel is fine all through.

The programme is formidably intelligent: well-known items are placed alongside some terrific music by composers we rarely hear (Halévy and Wormser, for instance), the aim being to remind us that the dividing line between success and oblivion can sometimes be painfully thin.