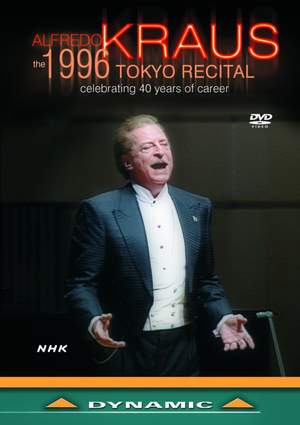 This 1996 Tokyo recital is a celebration of the distinguished Spanish tenor Alfredo Kraus’s 40 year career.

After warming his voice with two classical arias transcribed by Parisotti, Kraus launches into an anthology of music from the French, Spanish and Italian repertoires. The recital includes a duet from the first act of Lucia di Lammermoor and the famous aria "Pourquoi me réveiller?" from Massenet's Werther, an opera in which Kraus was considered an outstanding interpreter of the title role.

Each and every piece is managed with extreme elegance, noble aplomb and ease, qualities that he attained through a formidable technique and a careful career pacing. At sixty nine Kraus sings without any apparent effort and with that aristocratic nonchalance that was one of the most charming aspects of his style.