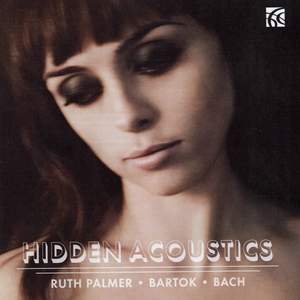 from the very start of the Bartok there's complete technical confidence, a wide tonal range and a sure sense of the music's dramatic direction...The Bach is given a Romantic reading, more along... — BBC Music Magazine, Christmas 2010, More…

Ruth says, “Bach’s solo violin music has its own hidden acoustics in its counterpoint, and I have found that solo violin allows me the purest link to the space and acoustic of the building in which I am playing. To me, when the piece of music and the building match in spirit, something magical happens.”

In the words of Daniel Libeskind, “That raw communication between the building and the person, the child so to speak, standing in front of it and being in it, that is really the discourse; it’s an experience that you have with your body, with your mind, with your soul.”

One of the most dynamic performers of our time, violinist Ruth Palmer, has garnered international recognition, including a Classical BRIT award for her recording of Shostakovich with the Philharmonia Orchestra. Recent performances include appearances with the Royal Liverpool Philharmonic, Academy of St Martin in the Fields, Ulster, English Chamber, and London Chamber orchestras with conductors including Andre de Ridder, Vasily Petrenko, and Carlo Rizzi. She has recorded for EMI, Quartz, and AVIE, and appears regularly on BBC Radio3, BBC Radio 4, Classic FM radio and Classic FM TV.

Ruth plays the Yfrah Neaman Stradivari kindly loaned to her by his family.

from the very start of the Bartok there's complete technical confidence, a wide tonal range and a sure sense of the music's dramatic direction...The Bach is given a Romantic reading, more along the lines of older interpreters...In the faster movements Palmer finds a dancing lilt...and the pacing is impeccable

Palmer plays the D minor Partita as if entranced by its supreme quality, inflecting its pseudo-contrapuntal lines with infinite subtlety...The Bartok Sonata is one of the most formidable works in the violin repertoire, yet Palmer disentangles its finger-breaking demands with such a beguiling awareness of the music's innter soul that one barely notices its pyrotechnical extravagances.

I was immediately impressed by Ruth Palmer's 100 per cent involvement in her music-making. From the passionate start of the Tempo di ciaccona at the beginning of the Bartok, we're strongly drawn into her interpretation...Palmer's Bach is similarly rich-toned and intensely felt...throughout both works, we're aware of listening to distinctive, persuasive violin-playing.

Palmer not only has the measure of these works in her fingers but also brings a degree of interpretative insight which enables her to shape and convey the character of the movements as they arise...Her flexibility is just right [in the Bach], exuding passion where called for and, in the wonderful Corrente, a fleet nimbleness...this performance is of a very high stature throughout

Bartók's massive first-movement is a chaconne, and clearly evokes the last movement of Bach's partita in its opening bars. Palmer's performance of both works is hugely impressive; she combines all the necessary technical skill with a real sense of occasion in her playing.These are unquestionably public performances of tremendous panache.

The Independent on Sunday 10th October 2010

The match between Palmer's Stradivari and the clear glow of the Temple Church is ideal, allowing for the sharpest detail of articulation and unhurried admiration of the musical architecture. The Bartok is brazen and bruised, the Bach exquisitely poised.