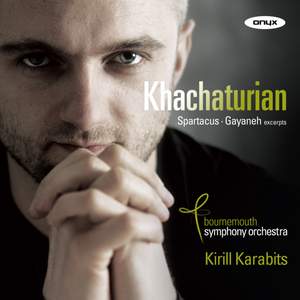 Karabits elicits thrillingly bright tone from the Bournemouth players who take naturally to the off-beat rhythms and joyful, holiday atmosphere of both ballets. The strings are rich-toned in... — Classic FM Magazine, February 2011, 3 out of 5 stars More…

Introduction - Dance of the Nymphs

Adagio of Aegina and Harmodius

Variation of Aegina and Bacchanalia

Scene and Dance with Crotala

Dance of the Gaditanian Maidens

Dance of the Girls

Dance of the mountaineers

‘Not a hair of a note was out of place; this was a performance by a world-class orchestra’ The Times

Kirill Karabits is without doubt one of the most exciting conductors of the younger generation.

Now principal conductor of the Bournemouth Symphony Orchestra, his reputation over two seasons has continued to spread around the world, and the steady stream of great artists working with him and the BSO is testament to his artistry and huge talent.

This CD is the first release in the new partnership between the BSO and ONYX.

Khachaturian’s vividly colourful and deliciously tuneful ballet scores have been popular as orchestral showpieces ever since the ballets had their premieres.

Kirill has made his own selection from the score, and those who want the famous Adagio from Spartacus and the Sabre Dance from Gayaneh will not be disappointed!

The second BSO release from ONYX will appear in 2011, and the programme will be Tchaikovsky’s Second Symphony and Mussorgsky’s Pictures at an Exhibition.

Karabits elicits thrillingly bright tone from the Bournemouth players who take naturally to the off-beat rhythms and joyful, holiday atmosphere of both ballets. The strings are rich-toned in the Dance of the Girls and Aysha Monologue and the wind calls on fine soloists.

[Karabits] is totally sympathetic to Khachaturian's music and includes most of the best numbers from both ballets...This is now easily the best disc of Khachaturian's music in the catalogue, full of vibrant life and seductive lyricism, and the recording (made this year in the Lighthouse, Poole) is first class in every respect. Not to be missed.

The performances of these flamboyantly colourful scores are very fresh indeed, and the coupling of The Seasons, with Ansermet conducting, is very good too...The Bournemouth orchestra plays splendidly and the recording (apparently made in the Poole Lighthouse!) is expansive and wide-ranging.

Karabits is notably good on the contrast between Roman decadence and revolutionary nobility...though Karabits is more interested in love than armies, the one fight scene he includes is electrifying...But it's the hair-raising Lezginka, placed earlier, that leaves you open-mouthed.

the consistently rewarding feature is the way that Karabits so astutely guides the BSO in terms of colour, rhythm and shapely phrasing, bringing admirable delicacy to these scores as well as the ripeness for which they are renowned.

The Independent on Sunday 5th December 2010