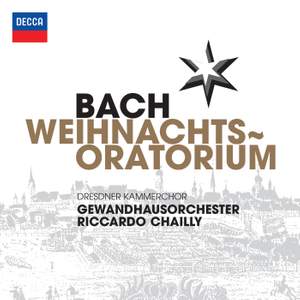 The six parts which make up the Christmas Oratorio tell the biblical story from Christ's birth to the adoration of the shepherds and the Magi, and the flight in to Egypt to escape Herod's slaughter of the infants. Having first conducted the Gewandhausorchester in 1986, Riccardo Chailly's association with Leipzig is now only one year less than Bach’s. Played on modern instruments, Chailly’s Bach beautifully demonstrates that vivid, stylistically aware performance is not the exclusive preserve of period instrument ensembles. This is the third of Bach's large-scale masterpieces recorded by the Gewandhausorchester under Riccardo Chailly and released on Decca and follows critical acclaim for The Brandenburg Concertos, released in January 2010 (4782191) and the St. Matthew Passion, released in March 2010 (4782194).

If you like your Bach thick-set but with historically informed inflections, seek it out.

The first chorus gets things off to the most exciting start imaginable...he's very quick, but nothing sounds rushed or garbled - the articulation of the orchestra is stunningly rhythmic and precise, with a lovely sense of shape and of direction - as is the choral singing...This is an exceptional Christmas Oratorio and it becomes one of the front-runners in a crowded field.

it is not far short of revelatory. He proves beyond any doubt that vivid, stylistically aware performance is not at all the exclusive preserve of period instrument ensembles. In this recording the orchestra are superb and the huge tonal richness which the choir and orchestra reach in the climaxes is incredibly powerful.

His trumpets are spectacular and he brings a rare sense of drama and rediscovery to this glorious music.

a wonderfully flexible and dramatically vivid account, constantly illuminated by the obbligatos from the Gewandhaus wind...Chailly manages to combine the rhythmic lightness of a period-instrument performance with the tonal richness of a traditional orchestra. It is by far the most successful of his Bach forays to date.

[Chailly] eschews the current trend towards period instrumentation, with no perceptible loss of authenticity. It's marvellously recorded, the solo vocalists sustaining poise and clarity against the full onslaught of choir and orchestra, while the fulsome brass brings a dazzling, burnished lustre to the performance.

Any discerning music fan will be thrilled to receive Bach's Christmas Oratorio (Decca), a superb new recording by Riccardo Chailly