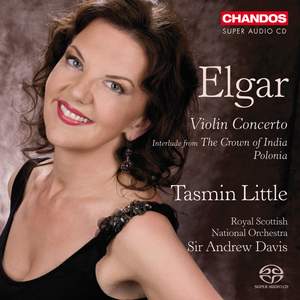 Little and Davis steer a near-perfect path between the English stoicism and continental passion that lies at the heart of this glorious score. Positioned naturally against the orchestra, Little... — Classic FM Magazine, January 2011, 5 out of 5 stars More…

III. Alternative cadenza by the composer

The long-awaited and much anticipated recording by Tasmin Little of Elgar’s Violin Concerto will be released this November, 100 years after the work’s first performance. In concert Tasmin Little is closely associated with this concerto, having celebrated the 150th anniversary of the birth of Sir Edward Elgar with performances of it on a major tour to Southeast Asia and Australia in 2007; she has also performed the concerto extensively in London: at the BBC Proms in the Royal Albert Hall, with the BBC Symphony Orchestra at the Barbican, and with the Philharmonia Orchestra in the Royal Festival Hall. What makes this recording especially interesting is that she has included the cadenza used in the work’s first recording, made in 1916 with Marie Hall. For that occasion, Elgar, amongst other things, added harps to counter the sonic limitations of the acoustic recording process. For those used to hearing the standard version, also included, the result makes for fascinating listening, and the recording will prove a valuable addition to the Elgar discography. The 1916 version of the cadenza has been tracked separately.

Tasmin Little: ‘I have waited a long time to record the Elgar Concerto, a work that I have been playing for twenty years and one which is so close to my heart. In the inspirational Andrew Davis and the RSNO’s commitment, I found exactly the right partnership for this monumental work.’

The Violin Concerto is complemented by another piece for violin and orchestra, the charming Interlude from The Crown of India, as well as the rarely recorded but imposing Polonia, an inventive and colourful work incorporating much Polish melodic material. This was commissioned by the Polish conductor Emil Młynarski in 1915 and dedicated to Ignacy Jan Paderewski, the pianist-composer and, later, Prime Minister of Poland.

Since coming to prominence as a finalist in the string section of the 1982 BBC Young Musician of the Year competition, Tasmin Little has enjoyed an international career, making more than twenty recordings. Highly imaginative in her approach to classical music, she received the 2008 Classic FM / Gramophone Award for Audience Innovation in London for the project ‘The Naked Violin’. Whilst she has made superb recordings of the great popular violin concertos, including those by Bruch, Brahms, and Sibelius, she has made a speciality of recording and performing less familiar repertoire, especially neglected British works. On Chandos, she has released a recording of Finzi’s Violin Concerto to tremendous critical acclaim (CHAN9888).

Sir Andrew Davis is famous for his performances of British music in general, and of the music of Elgar in particular. Last year he had great success with the premiere recording of Elgar’s The Crown of India on Chandos (CHAN10570(2)). Chandos also has a long association with the Royal Scottish National Orchestra. Over the last thirty years the label, in partnership with the RSNO, has produced a string of award winning CDs, notable among much else for their sound quality. This new CD, recorded in five-channel surround sound, continues that tradition.

Little and Davis steer a near-perfect path between the English stoicism and continental passion that lies at the heart of this glorious score. Positioned naturally against the orchestra, Little shares the concerto's surging emotional narrative equally with her accompanists, without the slightest hint of virtuoso ostentation.

Little...finds an element of wit in the fast-moving figuration [of the finale], leading to a more tender treatment of the lyrical contrasting sections.

She takes the opening Allegro boldly, and with plenty of confident ardour...Far more than was possible in the early recordings, there is scrupulous balance, with and sometimes within Elgar's rich but always lucid orchestration (he was, after all, a violinist himself) ensuring that the performance does as full justice to the sound as any on record.

This may have been a bumper year for this work...but Little brings a profoundly idiomatic nostalgia to this secretive, yearning, wistful yet passionate music. The extras make it an Elgarian must-have

If ever a violin concerto deserved the feminine touch, it is Elgar’s...[Little] knows just how to make her violin sing, subtly swelling and fading through the solo part’s lyrical lines as Elgar penetrates the mysteries and wonder of the feminine soul...[She] is tender, velvet, winsome, always beguiling, never de trop, with complete mastery of the pianissimo caress .