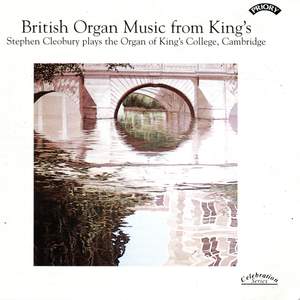 One could not wish for a more genial or engaging guide than the Cathedral's organist, Simon Johnson. A brilliant and sensitive musician, his deeply satisfying programme more than does justice... — Gramophone Magazine, December 2010 More…

Stravinsky: Finale from The Firebird

Recorded in Stereo and 5.1 Surround Sound.

Contains DVD and a CD of the recital sound track.

Bonus Features include a tour of the organ and its history.

This new DVD and CD from Priory is the fifth in a series of organ recitals filmed in Britain’s great cathedrals. The programme is designed around the history of the building, and contains in particular a poignant reminder of the blitz in 1940, with the music of Samuel Barber’s Adagio.

Filmed beside the new nave console this is also the first recording since the instrument’s restoration; also seen are numerous pictures from inside and outside the Cathedral including the crypt and the whispering gallery, together with illustrations of the Great Fire of London. The music has been specially chosen to provide links with organists connected with St Paul’s, including Maurice Greene, Hubert Parry, Felix Mendelssohn and Georg Frederick Handel. Jeremiah Clarke’s famous Trumpet Voluntary was recorded to show off the west end royal trumpets – (and for hi-fi buffs listening in 5.1 surround sound these will be heard only from the rear speakers.) This we believe is Priory’s greatest DVD to date in terms of technical brilliance and recorded sound – every available trumpet and tuba combination has been demonstrated by Simon Johnson in this recital, and his visual ‘talk-through’ of Norman Cocker’s ‘Tuba Tune’ on one of the bonus features is fascinating both for students and general listeners alike.

One could not wish for a more genial or engaging guide than the Cathedral's organist, Simon Johnson. A brilliant and sensitive musician, his deeply satisfying programme more than does justice to the vast five-manual Willis/Mander organ and its awe-inspiringly cavernous acoustic...Spine-tingling sublime.

This is a remarkable demonstration of what is achievable on a DVD recording of an organ concert. The playing sparkles throughout, the sound and picture quality are immaculate and the camerawork is imaginative and engaging. However, the real triumph is the marriage of the audio and the visual...the programme has been planned in so much detail and with such thoughtfulness as to make the connections truly meaningful for the viewer.