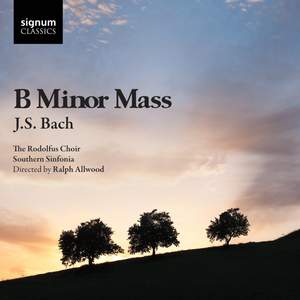 they achieve remarkable facility in passagework: I've never heard nine basses in such perfect accord in the tortuous 'Et iterum venturus est'...The soloists are a fine team. In 'Domine Deus',... — BBC Music Magazine, January 2011, 5 out of 5 stars More…

“The B minor" – that phrase alone resonates with gravity in the hearts and minds of those who love as no other the music of J.S. Bach.

This disc sees the Rodolfus Choir at their best, as renowned Bach interpreters, having sung his works across the UK to great acclaim. Following a live broadcast on BBC Radio 3 and performance at Holy Trinity Guildford at the end of 2009, this disc, recorded in the chapel of Charterhouse School, continues their ever-growing catalogue of extraordinary recordings and follows their acclaimed recording of music by Herbert Howells, released earlier this year (SIGCD190)

the overriding feeling of this recording is its lively pace and its refusal to hang around...The opening of the Credo finds the choristers presenting beautifully moulded choral lines with such an astonishing legato that they positively glide by. Allwood is also blessed with an outstanding team of soloists...Throughout the Southern Sinfonia lend distinction to the performance.