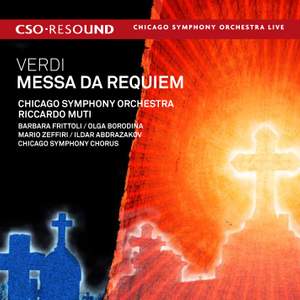 ...much remains of the potency of [Muti's] classic 1979 recording...The Dies Irae, for instance, retains all his customary bite and fury...Frittoli's substantial soprano charts the emotions of... — BBC Music Magazine, December 2010, 3 out of 5 stars More…

Chicago inaugurates Riccardo Muti’s tenure as music director with their most anticipated release of the year. Recorded live in January 2009, from sold-out, electrifying concerts, this stunning performance brilliantly captures both the pathos and passion of Verdi’s masterpiece. Something of a marker in Muti’s career, who can forget his groundbreaking account for EMI? 'Chicago's new boss' features on the cover of September BBC Music Magazine and in a six-page feature/interview inside the magazine.

“I’m sure many in the packed hall will long remember it as a life-changing experience... The thwacks of the bass drum ricocheted mightily... with the fiery blasts of the brass from the balcony really sounding as if Heaven were beckoning.” Chicago Tribune

...much remains of the potency of [Muti's] classic 1979 recording...The Dies Irae, for instance, retains all his customary bite and fury...Frittoli's substantial soprano charts the emotions of the music along with the notes...Borodina's glamorous mezzo-soprano is employed with consistent insight and depth.

Muti and company do plenty with the rich material here, and succeed in making the Requiem a thoroughly entertaining work as well as a deeply artistic one. Many shades make for a varied performance, one that tackles the work confidently and with vim to spare.

[Muti] certainly runs the full gamut of emotions, as does his blazing and immaculately trained chorus, which sounds as if it understands the full import and context of every word of the Latin text, projecting the widest dynamic range and nuance. All-purpose fervour and sanctimonious rhetoric are mercifully off-limits.

This recording suggests that Riccardo Muti’s contract as music director of the Chicago Symphony Orchestra is likely to be a huge success. Muti’s conducting produces playing of astonishing clarity of texture and firmness of phrase, as well as high drama.